MIAMI -- Back in February, founder of Americans for Tax Reform Grover Norquist predicted the vaping community could decide the next presidential election, prompting CSP Daily News to question which candidate is the most pro-vape. Electronic-cigarette and vaping manufacturer V2 took that question to the vaping community, polling more than 600 vapers on political issues, including asking participants which candidate was the most “pro-vape.” 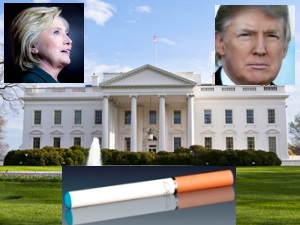 The results were mixed.

In terms of the most vaping-friendly candidate, among Donald Trump, Ted Cruz, John Kasich, Hillary Clinton and Bernie Sanders, 36% said Trump would be the most “supportive” of vaping. Clinton was the runner-up (with 28%), followed by Sanders (18%), Cruz (12%), and Kasich (6%).

“Trump is in favor of fewer government regulations in most areas, and vapers are worried about e-cigarette regulations,” said V2’s vice president of marketing, Adam Kustin. “This might explain his support. Trump is also backed by California’s Duncan Hunter, known as the ‘vaping congressman,’ which is a key endorsement in the e-cig community.”

Unfortunately for Trump, even though he’s the most pro-vape, most vapers are still backing Clinton: Thirty-one percent said they plan to vote for Clinton, while just 23% said they were “team Trump.”

“Eight percentage points separate Clinton and Trump,” Kustin said. “The former secretary of state has a commanding lead. But the fight for second place is close, with Trump and Sanders virtually tied.”

Cruz's and Kasich’s poor showing may come down to party lines, because 38% of those surveyed identified themselves as Democrats and more described themselves as independents (27%) than Republican (24%). Libertarians (6%) and Greens (5%) rounded out the mix.

Kustin was not surprised by this breakdown.

“Similar to our data, previous research has found that most smokers are Democrats,” he said. “Since vapers are former smokers, it only makes sense that the political group most likely to smoke is also the most likely to vape.”