WASHINGTON -- Tobacco companies including Altria Group Inc.'s Philip Morris USA unit lost a bid to dismiss the federal government's 1999 racketeering case, reported Bloomberg. U.S. District Judge Gladys Kessler in Washington ruled on Wednesday that her authority over the case was not ended by a 2009 law that empowered the U.S. Food & Drug Administration (FDA) to monitor the industry and establish restrictions on the sale, promotion and distribution of tobacco products.

The defendants, which also include Reynolds American Inc.'s R.J. Reynolds Tobacco and Lorillard Inc.[image-nocss] 's Lorillard Tobacco, argued that the FDA's new role meant court oversight of the industry is no longer needed.

Kessler said the cigarette makers continue to challenge the law that created the FDA's regulation of the industry and if they prevail, "it will be all the more necessary for them to be restrained by this court from any future violations" of the Racketeer Influenced & Corrupt Organizations (RICO) Act.

In 2006, Kessler found that the companies violated the law by conspiring to hide the dangers of cigarettes. She ordered the companies to stop marketing cigarettes as "light" and "low-tar" and to make statements about the health effects of smoking in newspapers and magazines and on cigarette packages.

British American Tobacco Plc, Europe's largest cigarette maker, was dropped from the lawsuit in March after Kessler said a 2010 ruling by the U.S. Supreme Court in a securities case restricts the United States from finding liability in "what is essentially foreign activity."

"We continue to believe that the FDA is the appropriate agency to regulate tobacco products and are considering our appellate options," Steven Callahan, a spokesperson for Altria, told Bloomberg.

Greg Perry, a spokesperson for Lorillard, declined to comment immediately, and representatives at Reynolds American's public relations department did not immediately reply to the news agency's request for comment.

(Click here for previous CSP Daily News coverage of the FDA and tobacco.) 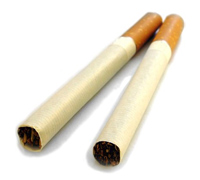