ROSEMONT, Ill. -- "It has been a very active year, both legislatively and with FDA tobacco regulations," Thomas Briant, executive director of the National Association of Tobacco Outlets (NATO) told participants at the CSP 8th Annual Tobacco Category Review Meeting.

Briant then outlined some of the more recent legislative highlights:

Department of Justice Corrective [image-nocss] Statements Litigation. In 2006, a federal judge issued a remedial order that required tobacco manufacturers to provide retailers with 18-inch by 30-inch signs, containing tobacco "corrective statements," for their store counters. That order is on appeal by manufacturers.

NATO has submitted a brief, indicating the order should be abandoned, partially due to a violation of retailers' free-speech rights.

"The right to have free speech under the first amendment also includes the right not to speak," Briant said, adding that the signs, in essence, force retailers to tell customers essentially why they should not smoke cigarettes. The order, he said, also violates due process rights and constitutional property rights--as well as creates a security risk by obstructing the view of clerks behind the counter. The industry is awaiting a decision on the matter.

Ban on color advertising. The ban only allows black-and-white text advertising. In August 2009, manufacturers and a NATO retail member sued the U.S. Food & Drug Administration (FDA) for a violation of First-Amendment free speech rights. In January 2010, a Kentucky federal district court judge ruled that the ban on color advertisement was unconstitutional, and Briant said the U.S. Supreme Court has ruled a number of times that free speech extends to commercial speech.

"Commercial speech is advertising, and you can't take away the right of a manufacturer to tell adult customers about their product," said Briant. The FDA has appealed the decision. The color advertising case also deals with the nine text and graphic warnings set to replace current surgeon general warnings in September of 2012. And while other countries have adopted graphic warnings, Briant points out that "most countries don't protect free speech like we do."

Menthol. Several manufacturers sued the FDA about the Tobacco Products Scientific Advisory Committee (TPSAC), because three members have testified against the tobacco industry as paid expert witnesses. If the court rules that there is a conflict of interest, the FDA may not be allowed to rely on TPSAC's menthol report, which had concluded that the "removal of menthol cigarettes from the marketplace would benefit public health in the United States."

The industry is awaiting an FDA ruling on menthol cigarettes, although there is no deadline for such a ruling.

Other tobacco products (OTP) regulation. The FDA is likely to begin regulating electronic cigarettes, cigars and pipe tobacco. NATO, along with the Pipe Tobacco Council, is sending a letter to the FDA, seeking a meeting to explain to FDA staff about cigars and pipe tobacco, and how they are distinctly different from cigarettes and smokeless and roll-your-own tobacco.

FDA retailer training. Guidance issued by the FDA recommends elements of an employee compliance training program, including informing customers about the health and economic effects of tobacco use and providing bonuses, time off or additional compensation for employees who pass tobacco compliance-check inspections.

NATO has submitted comments objecting to those recommendations, including that tobacco compliance should be part of an employee's job (without need for additional compensation). NATO has also requested that the FDA send out computer-generated letters to stores that pass the FDA's compliance checks. (Currently, letters only go out as warnings to retailers that have violations.)

"That's huge from a morale standpoint, and a pat on the back for your employees for not selling tobacco products to minors," Briant said. So far, after more than 14,000 FDA sponsored compliance inspections, about 97% of retailers have passed the inspections without any violations.

Local Legislation. Worcester, Mass., has adopted an ordinance that restricts outdoor tobacco advertising and in-store advertising that can be seen from the street. A similar advertising ban was overturned in the state of Massachusetts 10 years ago as unconstitutional. NATO and several manufacturers have sued the city of Worcester, with a hearing set for September 8th. While Briant said he generally doesn't predict outcomes, he added, "This violates everything the Supreme Court has ever said about tobacco advertising, and it being legal under free-speech First-Amendment rights." 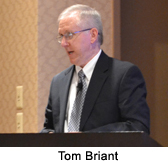