ARLINGTON, Va. -- It’s been 20 years since the national “We Card” retail program was launched in an effort to support retailers in combating youth access to tobacco and other age-restricted products. According to a We Card-issued press release, as many as 40%-60% of minors succeeded in purchasing tobacco back in 1995; today, that number has dropped to 10% based on the federal government’s 2013 Synar Report. 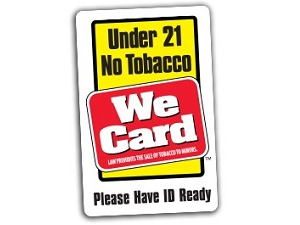 “We Card was a pioneering program in 1995 to help introduce the concept of responsible retailing on a massive scale, and ‘carding’ was a sometimes-used term,” said Lyle Beckwith, NACS senior vice president of government relations and a We Card board member. “Today, carding is commonplace, and We Card is forging new resources for all age-restricted products, including those designed to prevent e-vapor product sales to minors.”

As part of the annual We Card Awareness Month in September, the retail program will begin offering new resources targeted at e-vapor products, including new “Under 18, No E-Vapor: WE CARD” signage, in-store e-vapor kits for vape retailers that are new to the world of age-restricted products and an “E-Cig and Vapor Central” home on wecard.org where additional resources can be ordered.

Also new for 2016 is a smartphone site: We Card NOW. The site seeks to provide store managers and employees with immediate access to tools, including an age calculator and a digital version of the 365-page-a-day calendar for cashiers to “card” customers.

Since 2010, the U.S. Food and Drug Administration (FDA) has conducted more than 478,000 retail compliance checks, with 133,000 checks occurring in 2015 alone. We Card’s e-learning training not only matches the FDA’s official guidance for Tobacco Retailer Training Programs, but takes it a step further by including an emphasis on customer service, role-playing and interactive gaming. The training program has earned the American Business Awards 2013 Bronze Stevie Award for Best Training Site.

“We have many key stakeholders to thank for the tremendous 20-year track record We Card has in training and educating retailers,” said Doug Anderson, president of We Card, “and vital to our efforts is the important collaboration across retailers, state and national associations, manufacturers, state agencies and law enforcement.”