CHICAGO -- Craft beer continues to be a healthy growth opportunity for convenience stores and beyond. The subcategory saw 7.8% growth in case sales and 9.6% growth in dollar sales in c-stores during 2017, according to year-end data from IRI. The increases represent the strongest growth for the category among all channels of retail.

Ironically, while the category is driven by local brewers and consumers' desire for new and different flavors, half of the best-selling craft-beer brands (often referred to as "better beers" to include those owned by major brewers) in the United States are those that have been acquired by major brewers, according to IRI, and have capitalized on distribution strengths.

A Statista chart shows MillerCoors' Blue Moon is the best-selling craft beer in the U.S., with $341.4 million in sales, followed by Boston Beer Co.'s Samuel Adams at $287.1 billion, Sierra Nevada at $246.9 billion and New Belgium at $204.8 billion. 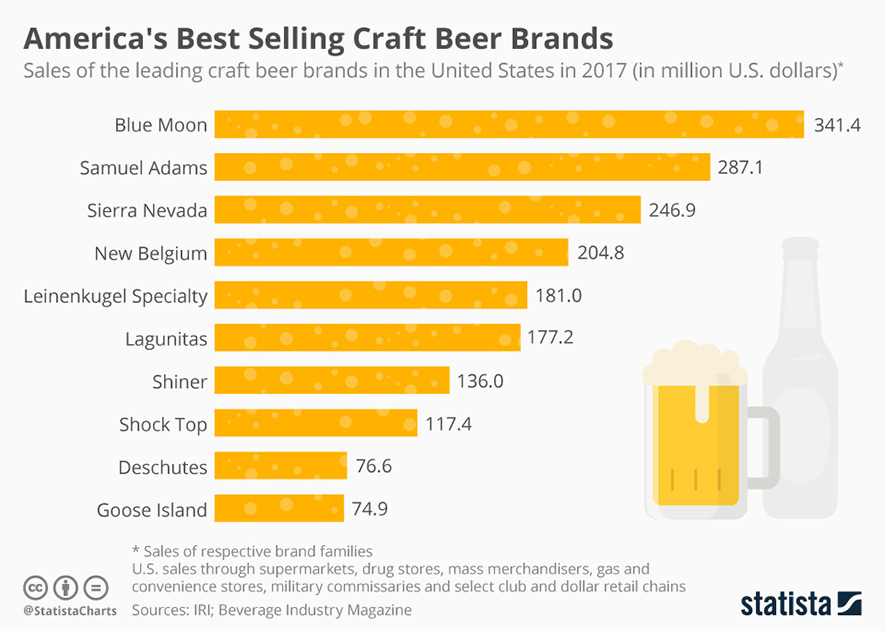 Among the beer brands in the top 10, Blue Moon and Leinenkugel are owned by MillerCoors, Shock Top and Goose Island are owned by Anheuser-Busch, and Lagunitas is owned by Heineken USA.

In c-stores, however, the top 10 craft-beer brands in 2017 varied slightly. They were:

Members help make our journalism possible. Become a CSP member today and unlock exclusive benefits, including unlimited access to all of our content. Sign up here.

Want breaking news at your fingertips?

Get today’s need-to-know convenience industry intelligence. Sign up to receive texts from CSP on news and insights that matter to your brand.

More from our partners

Take the Guesswork Out of Advertising at the Pump

Top 202 details the largest chains in the convenience-store industry and the biggest M&A stories of the past year.

The latest information on products and trends in the convenience-store and foodservice industries.

Peek inside new convenience stores to uncover the best in retail store design across North America.

Survey Dives Into Owners’ Thoughts on CBD Products for Their Pets