CHICAGO — This spring, c-store retailers have faced a trial by fire.

The coronavirus had infected nearly 650,000 Americans and killed more than 28,000 as this issue went to print in mid-April. The pandemic had also triggered a social and economic chain reaction as states and cities put their entire populations under shelter-in-place orders and shuttered “nonessential” businesses.

C-stores, deemed “essential” by the Department of Homeland Security for their fuel and food offer, were allowed to keep their doors open. For many retailers, this proved both a blessing and an incredible test of their business plans, leadership skills and their employees—especially those in their stores. Here’s how the industry has risen to the challenge and revealed its generosity, tenacity and heart in the process.

In early March, as the size of the COVID-19 pandemic was just beginning to reveal itself, c-store operator StrasGlobal needed a plan.

“The contingency plans we had in place didn’t match up to the scope of what we thought we were going to face,” says Roy Strasburger, president of the Temple, Texas-based firm, which operates 25 c-stores for private owners in six states. “We had some contingency plans for things like hurricanes and tornadoes. We have a plan in place for foodborne illness. But we didn’t have anything about people bringing a disease into the store with them.”

Strasburger put together a task force to determine what it should do in the stores to weather the pandemic. In speaking to other operators, Strasburger realized, “while everyone else started off at the same place we did, not everyone has a clear idea as to what to do,” he says. “We decided to codify the COVID-19 response plan for our stores and [wanted] to share it with others.”

“Convenience stores have been elevated, with people realizing what is available there.”

The plan, which the company provided to CSP to share with the industry, is “a work in progress,” Strasburger says. It includes strategies for managing remotely and communicating with store managers, employees, suppliers, customers and the community; and health and safety protocols, including sanitizing the store and pumps.

Staying open also required retailers to contend with big changes in consumer behavior. Temporary sales spikes due to panic and stock-up buying in early March gave way to steep declines in in-store traffic and fuel demand by the end of the month. Shortened business hours, store occupancy limits and enforced social distancing—coupled with more people forced to stay at home—kept traffic light. The customers who continued to visit focused on items such as beer, cigarettes and snacks.

Employees, meanwhile, faced their own transformation: They had to ring up transactions and deliver a friendly greeting while wearing face masks and gloves, many from behind a sneeze guard.

With four BP-branded c-stores in Albany and Leesburg, Ga., owner Brijesh Patel unexpectedly found himself in a coronavirus hot spot. As of April 3, the Georgia Department of Public Health had reported 560 cases of COVID-19 and 30 deaths in Dougherty County, where Albany is located. That was the second-highest number of cases in the state at the time. 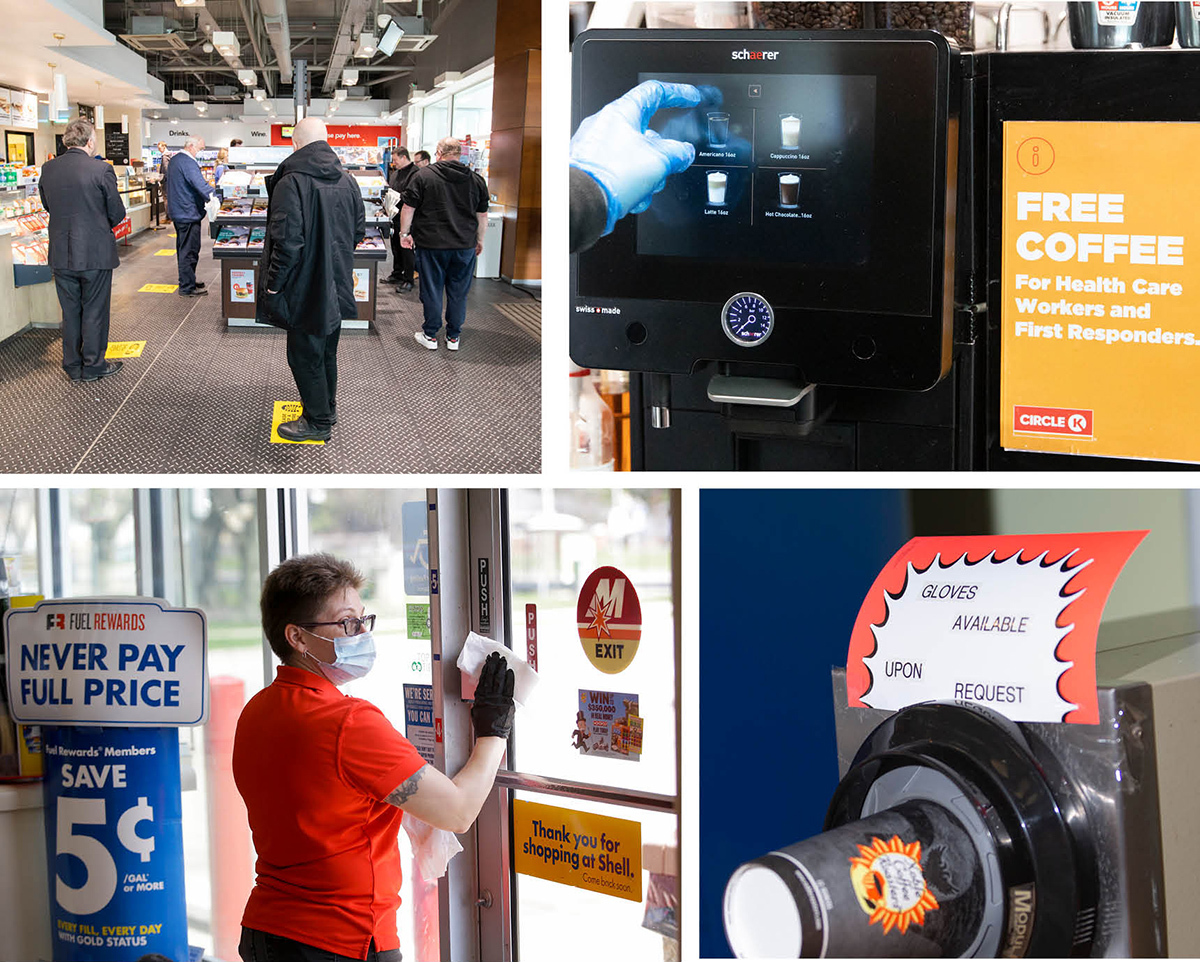 Social distancing providing coffee for workers in the front lines in the coronavirus fight and cleaning stores are all ways c-stores are taking care of their communities.

Patel’s fuel and in-store sales were down 50%. And he was frustrated by the types of items that some customers did buy, such as lottery tickets or candy bars, which he considered frivolous purchases during a health crisis. He considered shutting down his stores for two weeks to protect himself and his approximately 40 employees.

“They’re scared; I’m scared,” Patel told CSP in late March. “Two weeks isn’t going to hurt me. And I promised them if I shut down for two weeks, they’ll still get their weekly paycheck.”

The COVID-19 pandemic shined a spotlight on c-stores’ greatest treasure: their employees. In response to the stresses of running a store during a pandemic, operators from chains to single stores raised hourly employees’ pay and offered bonuses.

In March, 7-Eleven Inc. announced plans to hire as many as 20,000 new store employees, either directly or through franchisees, to shoulder the increased demand on its workforce and locations. Its more than 9,300 U.S. stores also expected a surge in mobile orders of staples such as bread, milk and over-the-counter medications through its 7Now delivery app, it said.

GPM Investments LLC, which operates and supplies more than 1,400 c-stores in 23 states, planned to hire 5,000 associates. “We recognize many people may be out of work,” Arie Kotler, CEO of Richmond, Va.-based GPM, said in announcing the initiative. “We want to assure people who live in the communities where we operate that we intend to continue operations and can provide employment opportunities for those who have lost their income as a result of the pandemic.” 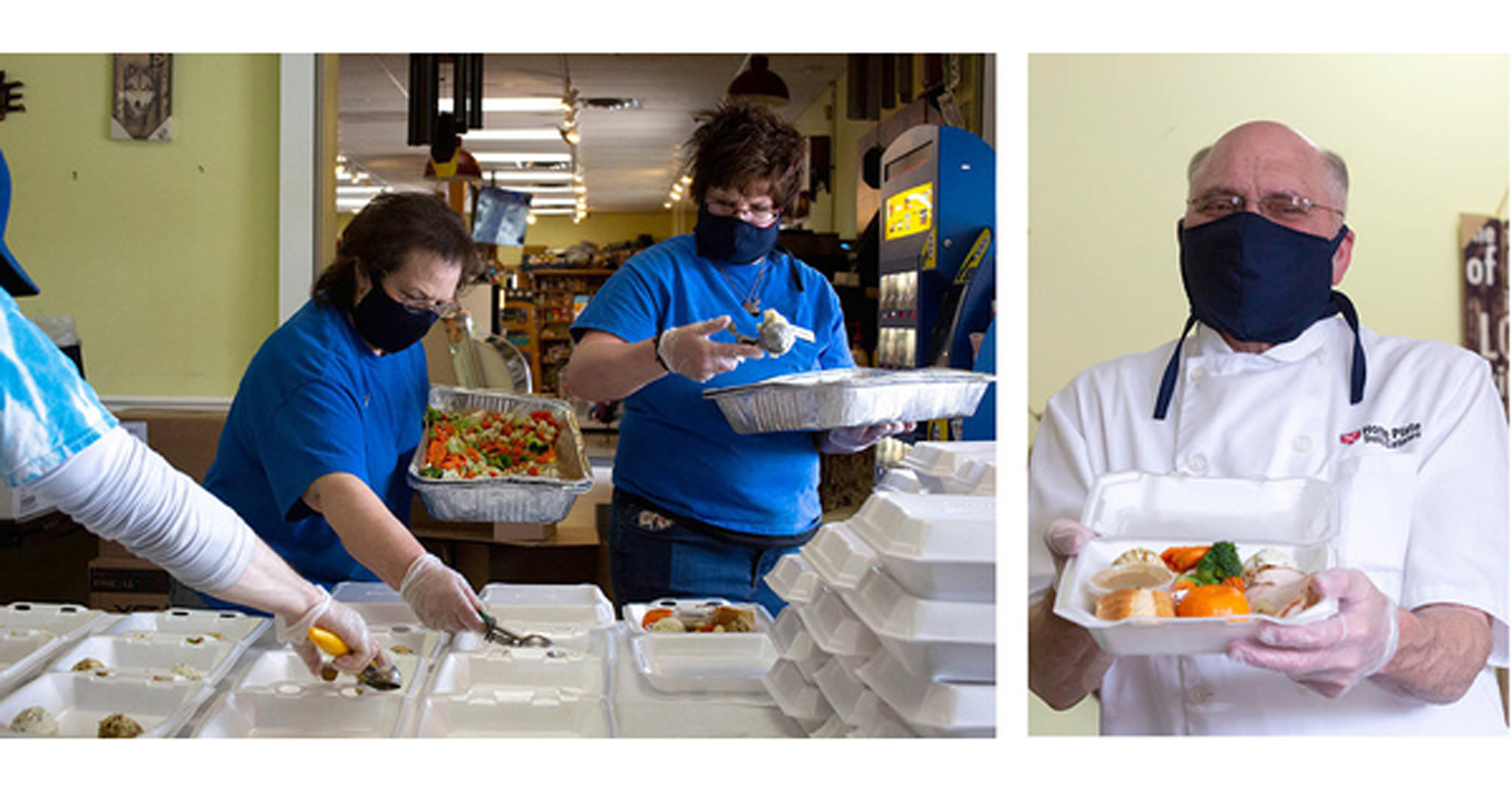 Alex Stier (right) and his associates at Olive’s Country Store and Cafe pack meals for the community.

Related: In the Trenches: How Retailers Reacted in the Early Weeks of the Pandemic

COVID-19 forced operators not only to rethink operations but also shut the door in the short term on profit centers in which they had invested their future. Nowhere was this more evident than in foodservice: C-store retailers had to rope off dine-in seating, shut down self-serve fountain and coffee bars, and wrap freshly baked goods in plastic.

As the country’s coronavirus response plays out, operators’ plans for these growth centers are now facing a rewrite.

CSP’s sister research firm Technomic, Chicago, has outlined three outcomes that the foodservice industry could face once the coronavirus outbreak slows. All three scenarios include an economic recession through the end of 2020. The mildest scenario would inflict a 10% to 11% decline in year-over-year foodservice revenue, and the worst, a whopping 21% to 22% drop.

“We’ve just seen the true spirit of our organization shine in this crazy time.”

Consumer trips to c-stores may decrease due to more people working from home and not driving, says Donna Hood Crecca, principal with Technomic. Commuting and leisure driving could fall by an estimated 50% during the crisis, with more severe declines in COVID-19 hot spots such as New York and New Jersey, according to Technomic.

“Strategies to drive in-store traffic with fewer fuel visits will be key, as will development of comprehensive e-commerce solutions,” Crecca says.

Foodservice formats that shifted away from self-serve during the pandemic may stay that course in response to consumers’ greater concern for food safety and sanitation, Crecca says. Meanwhile, packaged grab-and-go and made-to-order formats may flourish. Moreover, amenities such as mobile order and pay, delivery, drive-thru and curbside pickup may become consumers’ main means of buying prepared food instead of shopping in stores. Operators such as Casey’s General Stores, QuikTrip and Kum & Go expanded such services during the pandemic.

“Operators are going to have to evaluate how to move forward with the foodservice category,” Crecca says. 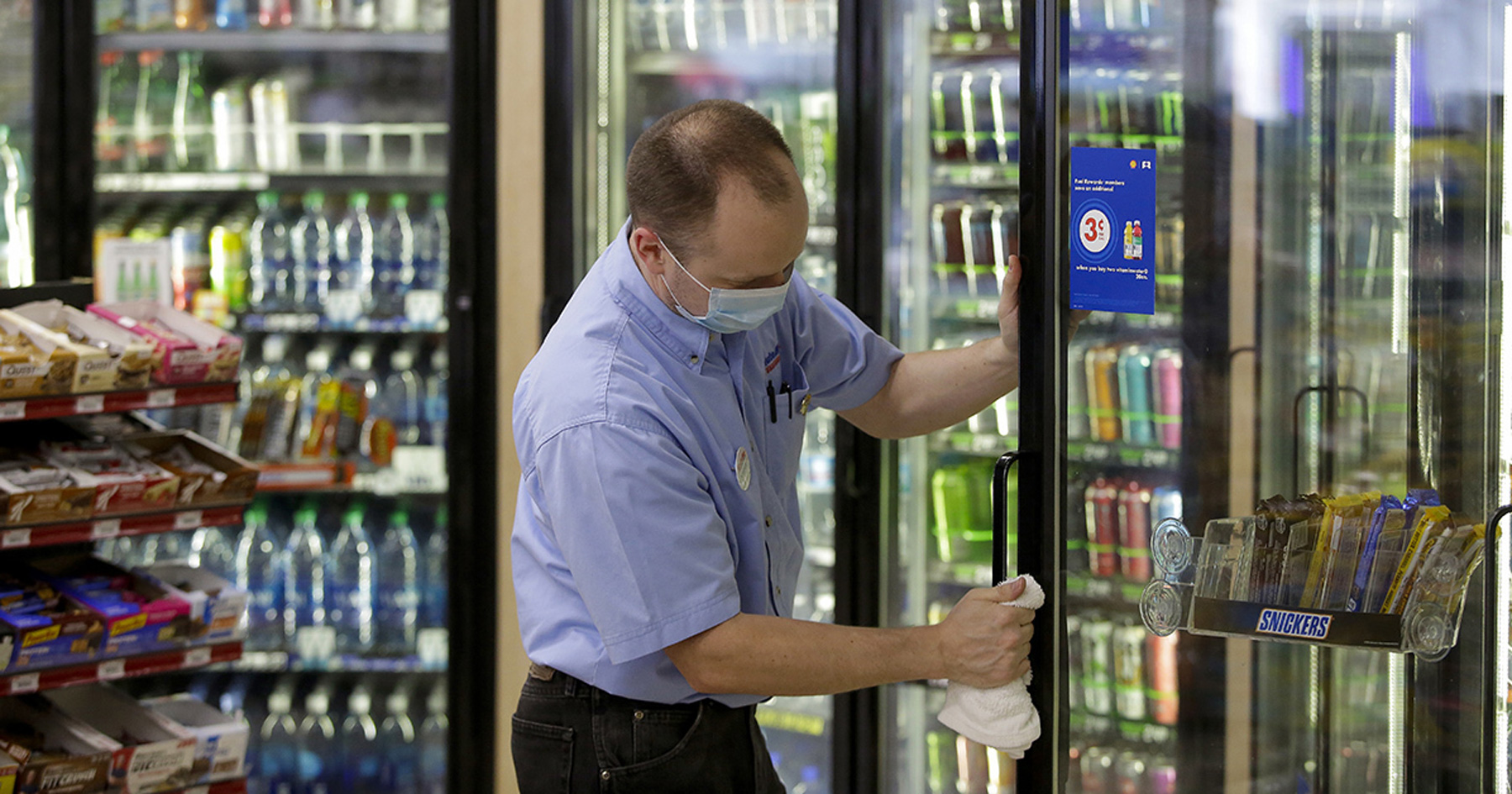 The stepped-up food safety and sanitization practices most c-stores adopted during the pandemic will also likely stick. The industry will be tested over the long term on whether it can achieve and maintain higher standards after the crisis, Crecca says. If c-store retailers are able to, they will be rewarded.

“Consumers may see convenience stores as viable sources for products and foodservice that either they hadn’t thought about before or they had not engaged with in recent years,” she says. “The consumer is going to be paying even more attention to [c-stores] as we go forward, and there’s an opportunity to be rediscovered and to re-engage with them.”

CSP asked c-store operators a series of questions regarding how the oronavirus has affected their business. The results are based on the responses of about 160 online survey participants from March 23-25.

COVID-19: In the Trenches