SPRINGFIELD, Ill. --  Illinois Attorney General Lisa Madigan and the Illinois Department of Revenue (IDOR) announced on Thursday that a Chicago-area gas station owner pled guilty and was sentenced to prison for defrauding the state of nearly $1 million in gasoline sales taxes. It is one of the largest cases of gasoline sales tax fraud in the state's ongoing criminal enforcement operation. 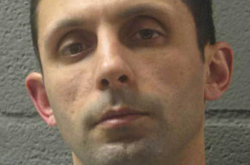 To date, the operation has recovered more than $82 million owed the state from gas station owners who evaded sales tax payments.

Samer T. Farhan, 33, of Palos Hills, Ill., appeared before Cook County Circuit Court Judge Kenneth J. Wadas and pled guilty to filing fraudulent sales and use tax returns and mail fraud, Class 3 felonies. Farhan was sentenced to two years in prison and will pay the total $975,862 that he defrauded the state by underreporting sales taxes at his two gas stations.

From May 2008 to April 2011, Farhan underreported sales at CITGO Gas in Chicago and Valero Gas in Calumet City. Ill. Farhan schemed to conceal the underreported sales by laundering more than $200,000 to an overseas bank account based in Amman, Jordan.

"This is among the largest cases of sales tax fraud committed by a gas station owner that we have uncovered in our ongoing criminal enforcement initiative," Madigan said. "It is an extremely significant result that will bolster our efforts to pursue individuals intent on defrauding the state."

The case is part of the ongoing operation led by Madigan's office and IDOR to recoup sales tax losses from gas stations throughout Illinois that underreported revenues to avoid paying taxes to the state.

The crackdown on gas station owners, now in its third year, has led to a new law in Illinois to penalize these criminals. The law, which was an initiative of Madigan's office and took effect in January, established stronger penalties and strengthened prosecutors' ability to pursue Illinois businesses and retailers that evade their sales tax bills. The law created the new crime of sales tax evasion and imposed graduated penalties based on the amount of sales taxes that were evaded.

The IDOR's Bureau of Criminal Investigation and the AG's office investigated this case with assistance from the U.S. Secret Service.