BRYAN, Texas -- Is Chicks, a new "mega" convenience store brand in Bryan, Texas, too similar to the Buc-ee’s chain? Buc-ee’s thinks so, as evidenced by a lawsuit filed in March. 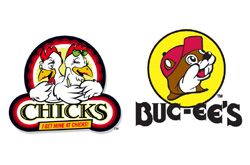 Chicks, which opened in Bryan, Texas, on April 8, appears to be aimed at competing with the well-known Buc-ee's chain, according to a report by KBTX-TV. And its design is so like the high-profile convenience retailer’s that Buc-ee's filed an intellectual property and trademark lawsuit against Chicks Development Group LLC in Texas Southern District Court.

The lawsuit stems from the similar concepts, including site and store design, product mix, construction and even logo, according to court filings accessed by CSP Daily News. Buc-ee's executives contend the similarities will confuse consumers.

New Braunfels, Texas-based Buc-ee's Ltd., a retailer known for its large stores, wide variety of merchandise, clean restrooms--and its iconic Beaver logo--has nearly 30 locations in Texas, but none yet in the immediate Bryan/College Station area (new stores are coming to still-relatively-distant Bastrop and Waller in 2013).

The Chicks location in Bryan, the chain's first, features 23 restrooms, 18 Exxon-branded gasoline dispensers, a deli with 300 menu items including tacos, 60 soda fountains, coffee, ICEEs, self-serve frozen yogurt, kolaches, its own brand of fresh beef jerky and 20-pound bags of ice for 99 cents, according to its website. It has 12,000 square feet of retail space and 120 parking spots.

Not surprisingly, Chicks logo is a chicken.

Chicks "attempts to copy the concept, design and trade dress of plaintiff's convenience stores," according to the court documents in the Buc-ee's lawsuit. "Defendants' actions are creating, and will continue to cause, confusion in the marketplace because their infringing store design copies the look and feel of Buc-ee's stores, and the defendants are marketing their business using a 'Chicks' logo that infringes on the federally registered trademarks of Buc-ee's."

Buc-ee's contends that it has become a "household name across Texas" and the "defendants have copied and usurped the trademarks that make Buc-ee's stores immediately identifiable and unique."

The original Buc-ee's trademarks have been in continuous service since July 1982, the company said, and it registered Buc-ee's with the U.S. patent & Trademark Office in 2010 and 2011.

"Defendants' anthropomorphic and cartoon representation of the chickens … in connection with a convenience store copies the most important aspects of the iconic Buc-ee's marks," including colors, shapes and fonts, the documents state.

Defendants Ray V. Hansen and Jackson T. Fulham moved to dismiss Buc-ee's original complaint against them and Chicks Development Group because it is "devoid of any substantive allegations against Hansen or Fulham apart from the corporate defendant, Chicks." Buc-ee's subsequently amended the complaint, saying Hansen and Jackson are "the sole officers of Chicks [and] have personally and substantially directed and controlled Chicks, including directing and controlling the design, construction, features and layout of the Chicks store, as well as the promotion and marketing of the Chicks store."

Fulham, president and co-owner of the new Chicks store, said he felt it was time Bryan/College Station "had a pit stop worth stopping for."

"We noticed is that this community needs a store [with] what we have," he told KBTX. "How this store does" will determine whether the company opens more locations.