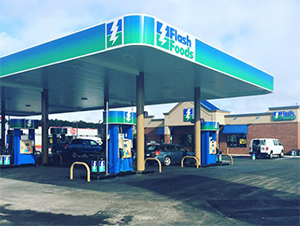 Based in Waycross, Ga, The Jones Co. and its affiliates operate 165 convenience stores in Georgia and Florida

“I want to welcome the dedicated team members of Flash Foods to CST,” said Kim Lubel, chairman and CEO of CST Brands. “We have great respect for the organization and are excited to work with and share best practices with this experienced group.”

The company expects the transaction to be accretive.

CST funded the closing of the transaction by cash on hand and borrowings under the company’s revolving credit facility. It recently amended its revolving credit facility to increase total commitments from $300 million to $500 million. The company anticipates recognizing certain tax benefits through a like-kind exchange of real property acquired in this transaction, including the real property that may be sold later this year as a result of the previously announced California network strategic review.

In setting out to acquire Flash Foods Inc.’s convenience stores and other assets--a deal that bridges the geographic gap between its existing retail networks in the Mid-Atlantic and South--CST undertook a strategic review of its 76 smaller retail sites in California.

“This transaction will effectively allow us to shift our resources from the growth-constrained California market to the Southeast, where we can expand not only through new stores, but also through expanded food and grocery offerings in the existing Flash Foods stores,” Lubel said during the company’s earnings call in November.

James C. Jones, the outgoing CEO of Flash Foods, said the selling of his family business was a complicated and emotional process.

“Fifth Third was our guide and friend throughout the unfamiliar, complex and emotional process of selling my family’s life’s work,” said Jones. “They understood the things that were uniquely important to my family and were just as comfortable walking away from an offer, even a very lucrative one, that didn’t meet those important criteria.”