KING OF PRUSSIA, Pa. -- Republican presidential candidate Donald Trump made a surprise stop at a Wawa convenience store on DeKalb Pike in King of Prussia, Pa., on Nov. 1, a few minutes after making a stump speech at the DoubleTree hotel in Valley Forge, reported Philly.com.

The Republican presidential nominee wandered the store for a few minutes and posed for selfies with a trio of customers, according to an Associated Press report. He did not purchase anything.

Trump was accompanied by his daughter and University of Pennsylvania grad Tiffany Trump, campaign manager and South Jersey native Kellyanne Conway and Bobby Knight, the former University of Indiana men's basketball coach who is a well-known Trump supporter, said a Breitbart report.

The Next Ken Bone?

But in what some are calling the greatest unintentional photo bomb of the 2016 campaign, Tom Kohler—on a Wawa lunch run—got caught in the line of media crossfire when Trump walked into the c-store. In the Getty Images photo that has now gone viral, Kohler is clearly not pleased with his proximity to the GOP nominee. 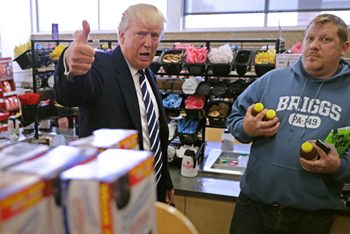 And he has good reason. Kohler is the chair of the Upper Merion Area Democratic Committee, and a legislative aide to Democratic State House Rep. Tim Briggs, said Philly.com.

“The circus came into town and stormed through the store and disrupted everything and then up and left," Kohler told Philly.com. "I was just annoyed because I was just trying to get my lunch and I couldn't get away from him."

"I had just finished ordering at the touchscreen and walked into the circus of Trump and his entourage," Kohler said. "I walked off to the side and then they followed me over to the Tastykake aisle where I was waiting for my lunch. I walked away again to try to avoid being photographed and, obviously, I was not successful”

The candidate didn't do much in the store.

“He was there not more than two minutes,” Kohler said. "He didn't take any questions from reporters. The cameras and security detail were in the store longer than he was.”

Meanwhile, in other Trump-related convenience-store news, Shell has de-branded a gas station in Lewis County, Tenn., near Nashville, over a series of controversial digital signs with political messages that many customers found offensive.

One sign read “Trump that b*tch.” Others were not so subtle. All were pro-Trump and anti-Clinton.

“Independent wholesalers must adhere to branding guidelines set forth in our licensing agreements," Shell spokesperson Natalie Mazey said in a widely distributed statement confirming the de-branding. “When there are violations, we ask that they are addressed. Continued violations could result in additional actions taken, including potential de-branding of the site. We can confirm that Lewis Country Store … is no longer part of the Shell-branded network.”

A sign at the gas pump reads: “Due to our refusal to remove our pro-Trump sign, Shell has de-branded us. We will not be threatened or intimidated. Our doors will remain open. Vote Trump on Nov. 8th so this does not happen to you!”

Lewis Country Store is now completely out of gas after its owners decided they didn't want to continue getting gas from its supplier, said a Fox 17 report. The supplier says it still wants to supply the store with gas, but store owners refuse to keep getting gas from the supplier because Shell owns one third of the company.

"If whatever we done is so bad in Shell's eyes that they want to de-brand us, take their logo off, they don't want to have anything to do with us in the general public's eye, then they don't need to be getting that one third that they would be getting from our supplier," owner Bradford Lewis told the news outlet.

Wawa, Pa.-based Wawa did not respond to a CSP Daily News request for a comment on Trump's visit.