CHESAPEAKE, Va. --Discount retailer Dollar Tree Inc. has announced that it has completed the acquisition of Family Dollar Stores Inc. under the terms of the merger agreement first announced and unanimously approved by each company's board of directors in July 2014. 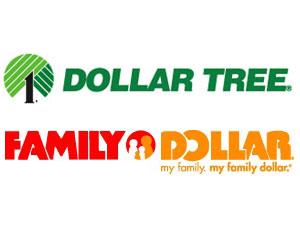 "This is a transformational opportunity for our business to offer broader, more compelling merchandise assortments, with greater values, to a wider array of customers," said Bob Sasser, Dollar Tree CEO. "This acquisition will extend our reach to low-income customers, while strengthening and diversifying our footprint. We plan to leverage best practices across both organizations to deliver significant cost synergies. Combined, our growth potential is enhanced with improved opportunities to increase store productivity and to open more stores across multiple banners."

*Creates a leading discount retailer in North America. The combined organization will operate more than 13,000 stores in 48 states and five Canadian provinces, with sales exceeding $19 billion annually, and more than 145,000 associates.

*Offers a complementary business model across fixed- and multi-price point. Dollar Tree is the nation's leading operator of fixed-price point stores, selling everything for $1 or less, and Family Dollar is a leading national operator of multi-price point stores providing value-conscious consumers with a selection of competitively priced merchandise in convenient neighborhood stores. The company intends to retain and to grow both banners going forward and will optimize the combined real-estate portfolio.

*Generates significant synergy opportunities. Dollar Tree expects to generate significant efficiencies through sourcing and procurement, format optimization, SG&A leverage, and its distribution network. The Company anticipates that the transaction will result in an estimated $300 million of annual run-rate synergies to be fully realized by the end of the third year post-closing.

*Enhanced financial performance and improved growth prospects. Dollar Tree will be better positioned to invest in existing and new markets and channels and to grow its store base across multiple brands. The combined company expects to generate significant free cash flow, enabling it to pay down debt rapidly.

The company also announced that Gary Philbin, 58, has been named president and COO of Family Dollar, effective immediately. In his new role, Philbin will continue to report to Bob Sasser. Philbin joined Dollar Tree as senior vice president of stores in December 2001; the company promoted him to COO in March 2007 and to president in June 2013. Prior to joining Dollar Tree, Philbin held senior-level positions in both merchandising and operations during his 30 years in the retail grocery industry.

"Gary has played an integral role in the success of Dollar Tree over the past 14 years,” Sasser said. “Gary was instrumental in improving the Dollar Tree customer shopping experience and the related customer satisfaction, as well as leading the integration following our Canadian acquisition in 2010."

Also, the company announced that Howard R. Levine, CEO of Family Dollar, has been appointed to Dollar Tree's board, effective immediately.

Sasser concluded, "We appreciate the efforts, dedication and teamwork displayed by both Dollar Tree and Family Dollar associates throughout our integration planning processes. We are well-prepared to integrate our two companies."