ALLENTOWN, Pa. -- In an acquisition that is "highly complementary" to the Rocky Top deal announced earlier this month, Lehigh Gas Partners LP has entered into an asset purchase agreement with Rogers Petroleum Inc. and affiliates to purchase 14 gas stations, assume the leases for three stations and purchase certain other assets and equipment at the 17 sites for total consideration of $21.1 million. 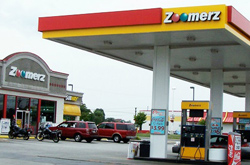 The deal is expected to close during the third quarter of 2013. The partnership expects to fund the transaction through funds available under its corporate credit facility.

As reported in a Raymond James/CSP Daily News Flash, the 17 sites are located in eastern Tennessee; 13 of the sites are Zoomerz-branded sites and the remaining four sites are Exxon branded. The partnership is acquiring the Zoomerz trademark and brand as part of the transaction.

Rogers Petroleum Inc., based in Morristown, Tenn., opened its first Zoomerz store in 1995.

In early August, Lehigh Gas entered into an asset purchase agreement with Rocky Top Markets LLC and Rocky Top Properties LLC on Aug. 1, 2013, purchasing 30 gas stations in the Knoxville, Tenn., area. It also entered into leases for four stations, assumed seven third-party supply contracts and purchase certain equipment and other assets at the sites for a total consideration of $36.9 million.

"We are excited to acquire the Rogers portfolio. The assets are high quality assets and highly complementary to the Rocky Top acquisition that we announced last week," said chairman and CEO Joe Topper. "Together, these two portfolios provide us scale in the region and a solid platform to further expand."

Describing the competitive landscape for acquisition, he added, "7-Eleven [has] the lead in the marketplace for what they want to buy. Then of the large jobbers market, we would obviously have the leading edge based on our capital structure to do it, but there are other competitors out there that are trying to grow knowing that they need to grow in this environment and level of things; they want to follow where we went ... but I think we have still a year, year-and-a-half advantage on any next competitors."