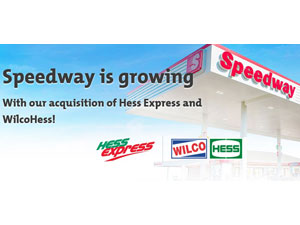 On its website, Hess posted the following message to customers:

"The Convenience Stores of Speedway will soon be in your neighborhood! Speedway is expanding our Midwest roots to the east, transforming more than 1,200 Hess Express and WilcoHess stores to the Speedway brand, bringing the ultimate in value, the widest selection… and Speedy Rewards, the best rewards program in the business! Be on the lookout for newly branded Speedway stores near you!"

New York City-based Hess is the largest operator of convenience stores along the East Coast and the fifth largest in the United States by number of company-operated sites, with 1,256 stores located in 16 states. Speedway is the nation's fourth-largest convenience store chain by number of company-owned and -operated sites, with approximately 1,480 stores located in nine states. The total Speedway store count when the deal closes at the end of the third quarter will be 2,733 company-owned stores, putting the company close to the top of the retailer food chain.

"This transformative acquisition provides Speedway a significant growth platform by expanding our retail presence to 23 states throughout the East Coast and Southeast," said MPC president and CEO Gary R. Heminger. "Growing Speedway's footprint as a premier convenience store operator into the eastern U.S. supports our strategic focus of increased investment in our stable cash-flow businesses. We believe targeting the significant synergy potential in this business, including best practices and economies of scale, should drive continued earnings growth into the future and enhance the value proposition to MPC investors."

The "fits us like a glove and is going to tee us up for long-term growth," he said when MPC announced the acquisition.

The $2.82 billion includes a $2.37 billion base purchase price, capital leases that were cash settled at closing for $263 million, and $194 million of estimated working capital, subject to post-closing adjustments.

In late August, MPC entered into a five-year senior unsecured term loan agreement with a syndicate of lenders providing commitments for $700 million in term loan borrowings that will be used to fund a portion of Speedway's acquisition of Hess Retail Holdings LLC.

MPC is the nation's fourth-largest refiner, with a crude oil refining capacity of approximately 1.7 million barrels per calendar day in its seven-refinery system. It sells Marathon-brand gasoline through approximately 5,300 independently owned gas stations across 19 states. In addition, Speedway LLC, an MPC subsidiary based in Enon, Ohio, owns and operates the nation's second-largest convenience store chain. 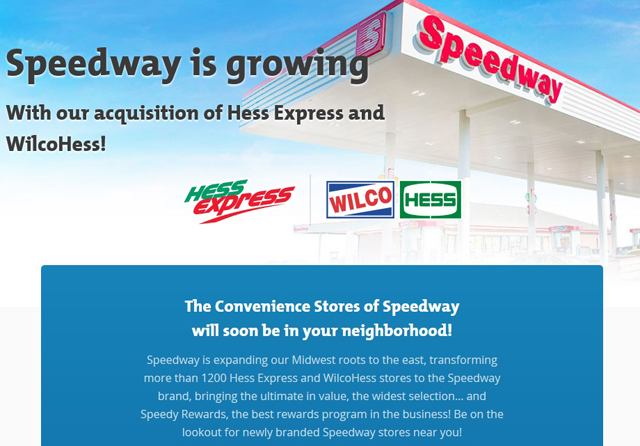