WASHINGTON -- Taking a cue from California, U.S. senators Frank Lautenberg (D-N.J.) and Dick Durbin (D-Ill.), and Representative Lloyd Doggett (D-Texas) have introduced the Smuggled Tobacco Prevention (STOP) Act, legislation that they say would collect hundreds of millions of dollars in revenue, combat criminals and terrorists who profit from the illegal tobacco trade and decrease the consumption of tobacco. 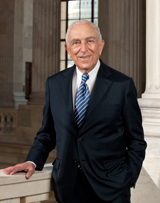 The bill is cosponsored by 118 members of the House of Representatives.

The STOP Act would help keep contraband tobacco off the market and ensure federal and state taxes are collected from cigarette sales. The U.S. Department of Justice estimates that tobacco smuggling in the United States costs federal and state governments at least $5 billion in lost revenue annually.

Recent reports from the Department of the Treasury and Department of Justice have called the illicit tobacco trade "a revenue issue that has widespread and detrimental implications" and found that U.S. efforts to combat tobacco smuggling have failed to keep pace with the volume and increasing sophistication of diversion schemes.

The STOP Act enhances law enforcement's ability to prevent illegal diversions of tobacco products and identify and punish those who take part in this activity. It mandates that packages of tobacco products manufactured in or imported to the United States bear a unique, high-tech identification marking similar to that which the state of California is already using.

In California, the first state to implement such a system, cigarette tax revenues have increased by an estimated $152 million per year.

This requirement, along with increased permit and record-keeping requirements throughout the supply chain, will enable enforcement officials to distinguish real tax markings from even the most advanced counterfeits, identify who applied the marking and initially sold and purchased the product, and obtain other information useful for tracking, tracing, and enforcement purposes. These requirements will help state and the federal governments increase their tobacco tax receipts without raising taxes.

The STOP Act address the serious and growing problem of illegal manufacturing by banning the sale, lease and importation of manufacturing equipment to unlicensed persons, and in order to prevent illegal re-entry of tobacco products for export into the United States, it requires export warehouse proprietors to file reports with the Treasury Department and authorizes the Treasury Secretary to enter into certain tobacco-related information exchange agreements with foreign countries. The bill also increases penalties for violating the law and establishes new offenses.

"Black market cigarettes are robbing our coffers of the funds needed to pay for children's health insurance and other vital programs. By stopping the sale of illegal cigarettes at below-market prices, we can reduce smoking and fight tobacco-related diseases, Lautenberg said.

"This bill will help us crack down on tobacco smuggling and keep black market cigarettes out of the hands of kids," said Durbin. "At the same time, we'll help the federal government and states collect the taxes they're owed on these products so they have the resources necessary to continue much needed tobacco prevention and other health programs."

Doggett added, "Tobacco products are the single largest, illegally trafficked, legal product on the planet. But current federal laws to stop smugglers are outdated and fail to give law enforcement officials the tools they need to enforce the law. … Snuffing out smuggled tobacco, whether sold here or shipped across our borders, can cut crime, raise revenue and boost health."