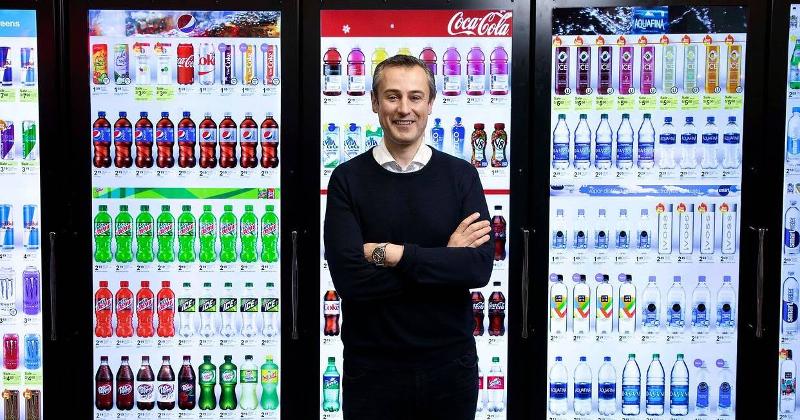 CHICAGO — After spending years looking at cold vaults, the founder of premium tea company Argo Tea came to a conclusion: The consumer experience was terrible.

“There were a number of ‘aha moments,’ which led to creating Cooler Screens,” said Arsen Avakian, who founded Argo Tea and is a co-founder of Cooler Screens.

Every problem with the setup of the traditional cold vault made it more difficult to sell packaged beverages, he said. So Avakian, along with co-founders Greg Wasson and Glen Tullman, came up with a product that better mirrored customers' experience shopping online.

Chicago-based Cooler Screens replaces a brick-and-mortar store’s glass doors with a digital screen that displays products, sales, nutritional information, advertisements and more. Walgreens is expanding the screens from its six pilot stores in Chicago, New York City, California and Washington state to 50 stores in the Chicago area and 2,500 stores nationwide, according to Laura Hayes, director of retail and owned brand communications for Walgreen Co., Deerfield, Ill.

Retailers can decide how much they want to buy into the concept.

Ads can be catered to the day—such as running a Super Bowl ad across several doors at the start of February or promoting a cold drink deal when the temperature hits 100 degrees.

The screens are not touchscreens, but optical sensors on the front of the doors use internet of things to analyze data streams in real time to determine customer proximity and engagement, according to Cooler Screens. The optical data is never stored, saved or made visible. The sensors track inventory and can gather data on consumers—such as what products they’re looking at and for how long they’re looking—without identifying the person, according to the company.

The interactive piece of Cooler Screens that provides nutrition tabs is not yet in stores, the company said. When looking at a screen, customers will see an image of the packaged beverage that they will find when they open the door. The price of the drink and information on sales also appears. Ads flash in thin banners on the screens, and they sometimes take over one or multiple cooler doors in full.

Ninety-three percent of consumers surveyed in a third-party survey preferred the digital doors, which have been in stores for about a year, according to Cooler Screens. Avakian said stores with the screens deliver 50% to 100% higher sales than non-digital stores.

“We're bringing consumers what they love about shopping online, into the cooler aisle—that's what we do,” Avakian said. “Consumers are now much more confident that they're making purchase decisions that will fit better their budgets, taste and health preferences.”

Retailers who want to provide better consumer experiences and who understand digital media are an opportunity for the screens, Avakian said.