WAUCONDA, Ill. -- Not Your Father’s Root Beer wasn’t supposed to be Tim Kovac’s break-out beer. The pirate tattoo on his upper arm quite literally illustrates this. 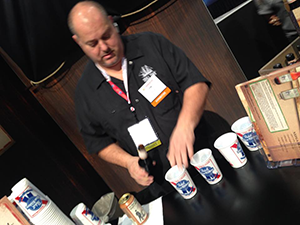 “I had brewed an American ale I called Pirate Ale. It was going to be my flagship [beer],” the head brewer and owner of Small Town Brewery in Wauconda, Ill., told CSP Daily News.

A year later, in 2012, Kovac and his son came up with Not Your Father’s Root Beer, and within three years, the craft-beer business would swing in a new direction.

“The biggest challenge then was getting new people to try it,” Kovac said. That became easier when Pabst Brewing acquired an interest in the tiny brewery and took Not Your Father’s Root Beer national.

Kovac said making the decision to partner with Pabst was easy.

“I still own the brewery and pretty much get to operate it the way I was before,” he said. “The advantage was, I wanted to get my beer out to the East Coast and the West Coast. Pabst made that possible.”

Not just possible, but improbably successful. Having reached the coast only this year, Not Your Father’s Root Beer quickly became the beer story of 2015.

During the 10-plus months since Not Your Father’s Root Beer has been available across the United States, the beer has become the nation’s sixth best-selling craft beer brand in stores, according to a Chicago Tribune report that cited IRI, a Chicago-based market research firm.

And in the meantime, “hard soda” has become the go-to new product for beer brewers far and wide. This spring, Boston Beer introduced a “hard root beer” under its new Coney Island brand. MillerCoors will roll out in February its Henry’s Hard Sodas in orange and ginger ale. Anheuser-Busch plans to release a hard root beer in December called Best Damn Root Beer as part of its new Best Damn Brewing Co., a subsidiary dedicated to sweet alcoholic beverages.

“There are a lot of copycats coming out,” Kovac said with a touch of glee in his eyes. “It’s shining the light on our side, which is great because we got there first!”

But Kovac, an enthusiastic and passionate teddy bear of a guy, doesn’t want to be a one-trick pony. He encourages fans to try Small Town Brewery’s Not Your Mom’s Apple Pie Beer—available on tap only in Illinois—and he says a Not Your Father’s Ginger Ale is in the works.

And while the future may not mean a revival of Pirate Ale, expect Kovac to toy with more unusual flavors—gruit beer, spices, flowers—to keep the beer industry on its toes.

“There are other craft-beer people that are trying to understand the different types of beer out there,” he said. “The ones who get it right have an opportunity to change the industry.”

A Flat Year for Beer Sales