Philadelphia retailers report beverage sales down as much as 55%.

In Chicago, a legal question of constitutionality briefly delayed the enactment of a soda tax by a month, and retailers have since been subject to a barrage of lawsuits by consumers.

And in Boulder, Colo., a ballot question to establish a tax on sugar-sweetened drinks became the city’s most expensive ballot measure on record, according to reports, as the American Beverage Association (ABA), local groups and even former New York Mayor Michael Bloomberg poured $3.2 million into spreading arguments on both sides.

On the whole, so-called soda taxes have become “the No. 1 biggest trend” in the country when considering state and local tax issues, says Scott Drenkard, director of state projects for the Tax Foundation, a nonprofit think tank based in Washington, D.C.

The concern for retailers, of course, is the drop in sales. “The impact has been pretty dramatic,” says Alex Baloga, president and CEO of the Pennsylvania Food Merchants Association (PFMA), a group challenging the legality of Philadelphia’s soda tax, claiming the tax conflicts with the state sales tax. City officials there approved a 1.5-cent-per-ounce tax on sugar-sweetened beverages in June 2016. The tax went into effect Jan. 1, adding $1.02 tax to a 2-liter bottle of soda, for example.

“We’ve been hearing about 40%, 50% drops in beverage sales,” Baloga says, “and that doesn’t take into account the overall sales loss as consumers look for other places to shop [outside the city].”

Pepsi bottlers in the area pulled larger package sizes off shelves, calling them too expensive. The decline in sales also triggered layoffs by bottlers. The large beverage makers would not comment for this story, referring questions to the ABA. 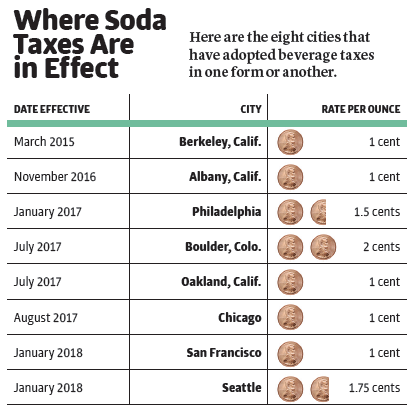 Philadelphia officials, however, aren’t buying it.

“The beverage industry has declined to release their volume sales,” says city spokesperson Lauren Hitt. “[That] likely has to do with the fact that the percentage increase in sales the industry has seen in the suburbs has made up for the losses they may have felt within the city.”

Though the tax is falling short of revenue projections, Philadelphia Mayor Jim Kenney is pleased with the results thus far, Hitt says; the tax generated $32.3 million in the first five months of collection to fund preschool education in the city.

The more than half a dozen c-store retailers CSP contacted for this story would not speak on the record. Two did say their beverage sales declined after the tax began, but “nowhere near” the 55% quoted.

In the hunt for hard data on soda taxes, most eyes turn to the longest-running tax: Berkeley, Calif. In 2014, the city placed a tax of 1 cent per ounce on sugar-sweetened beverages after 75% of voters approved the proposal.

A study published by the Public Health Institute and the University of North Carolina evaluated changes during the first 12 months of implementation of the tax (March 2015-February 2016). It found the volume of sugar-sweetened beverages sold in Berkeley declined by 9.6%.

Also, sales of untaxed beverages increased 3.5%, and overall beverage sales increased. Sales of water went up by 15.6%. City revenue from the first year of the tax was $1.4 million, or $12 per capita. Overall, grocery bills did not go up.

But Lauren Kane, the ABA’s senior director of communications, points out less publicized facts from the study. “The research has also shown that people actually increased their calorie intake by consuming things that had more calories,” she said, nixing the idea that the tax was helping fight obesity. “While they removed 6 calories per day by avoiding soda, they consumed more than 30 additional calories [per day] from the replacement beverages they chose.”

“We see the public still overwhelmingly opposes these taxes,” Kane says, suggesting retailers make their fight as public as possible, including forcing the issue onto a ballot, when contesting a proposed tax.

“When it’s a ballot measure, people oppose these taxes,” Kane says. “It’s more difficult to push these things through when voters have said no.”

Next: Regrets and Gas Taxes