CHICAGO -- Many of the top beverage categories in the c-store channel hit a soft patch in 2017. They include energy drinks, which saw units slip 0.9% in the 24 weeks ending June 11, 2017, and sports drinks, which fell more than 4% by units, according to IRI.

Among the biggest packaged-beverage categories by dollar sales, only bottled water and ready-to-drink coffee and tea posted gains during this time.

In a research note, Bonnie Herzog, managing director of consumer equity research for Wells Fargo Securities LLC, New York, suggested two potential factors behind the weak in-store sales for the first half of 2017. One is the increase in sales of light-duty trucks in recent years. While this is driving incremental traffic at the pump, “more money spent to fill larger tanks in lower-mileage automobiles is translating to less money remaining for in-store purchases,” she said. Consumers’ concerns over rising healthcare costs also could be dampening spending.

Along with water, coffee and tea, some alcohol subcategories are buoying the category. Brian Sudano, managing partner of Beverage Marketing Corp., New York, says current growth is in imported and superpremium beers; spirits such as tequila, bourbon, straight American and Irish whiskeys; and wines such as prosecco and blended reds.

According to IRI, c-store unit sales of spirits and liquor rose more than 16% in the 24 weeks ending June 11. Fireball flavored Canadian whisky and Jack Daniels American whiskey enjoyed strong gains in case sales during this time.

Declining subcategories include domestic beer, both value and mainstream, Sudano says: “In general, the biggest headwinds are moderation of beverage alcohol consumption and movement toward healthier lifestyles, and a slowdown in craft beer.” He expects overall beverage alcohol sales for 2017 to be in line with the previous year. 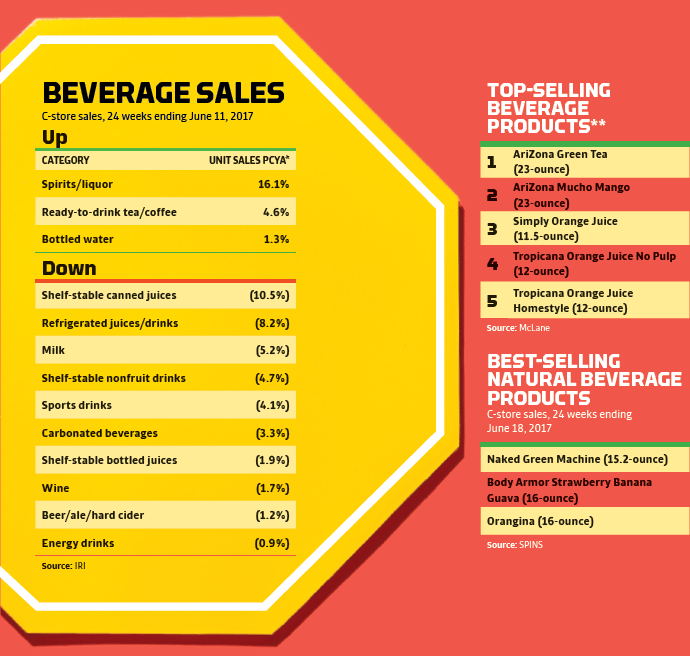 * Percent change from a year ago

** Products were isolated by McLane as top consumer velocity items in the six months ending June 30, 2017