ATLANTA -- Bob Myers has lived what he describes as “a simple life,” but based on the outpouring of love and gratitude from friends and family at a recent awards dinner, he has had an incredibly profound effect on those around him.

Approximately 350 attendees gathered at the Loews Atlanta Hotel to celebrate Myers, the chairman and recently retired CEO of Casey’s General Stores Inc., and CSP’s 2016 Retail Leader of the Year.

As presenter Mitch Morrison, vice president and retail executive platform director for Chicago-based Winsight LLC explained, CSP chooses its Retail Leaders of the Year based on their company leadership and performance, as well as their “total value system.” This includes how they treat employees, customers and their communities.

This value system is personified by Myers, who led Casey’s for nearly 10 years, said Terry Handley, its current president and CEO.

“Bob Myers understands the difference between great leadership and good management,” said Handley. “He advocates for strong leadership principles, and the need to provide necessary authority to those who carry responsibility with their assigned duties.”

Handley said Myers was the very definition of the concept of servant leadership, or one who shares power, puts the needs of others first, and helps people develop and perform at the highest level possible.

“He is a man of high moral character, deep faith, strong personal values, and a sense of duty to God, country, family, and of course, Casey’s,” said Handley. “He truly is an inspiration to all who know him.”

Much of that leadership style formed in the military, where Myers served for decades, rising to the position of Lt. Colonel before retiring and joining Casey’s in 1989. Travis Hanson, a retired 1st Sgt. in the U.S. Marine Corp, and senior director of sports and recreation for Hope for the Warriors, Washington, D.C., talked about Myers’ dedication to the charity, which supports post-Sept. 11 war veterans and their families.

He also gave a nod to Myers’ commitment to Casey’s employees, sharing a story of how the retail leader put aside his lunch and listened intently to the concerns of a cafeteria worker at the chain’s Ankeny, Iowa, headquarters for nearly half an hour during a recent visit.

“What she had to say was important at that time, and he let her know [that] he understood it and give her the same level of respect reciprocated to him,” said Hanson.

“Growing up in the military, what I learned is attitude is a reflection of leadership,” he concluded. “If you spent any time in a Casey’s General Store under Bob’s tenure, you understand exactly how that leadership is.”

On accepting the award, Myers showed his characteristic humility as well as gratitude, spending much of this time thanking everyone from industry friends to family to Casey’s coworkers.

“I am just deeply, deeply honored and humbled by this recognition,” said Myers. “To be candid, I’m just not comfortable being in the spotlight.”

He cited two former Retail Leaders, Sam L. Susser, chairman of Susser Petroleum Partners, and Joe DePinto, president and CEO of 7-Eleven Inc., who were in attendance and are close friends. “I am keenly aware of the past recipients … and their respective life accomplishments,” said Myers. “I don’t feel worthy to be in their class.” 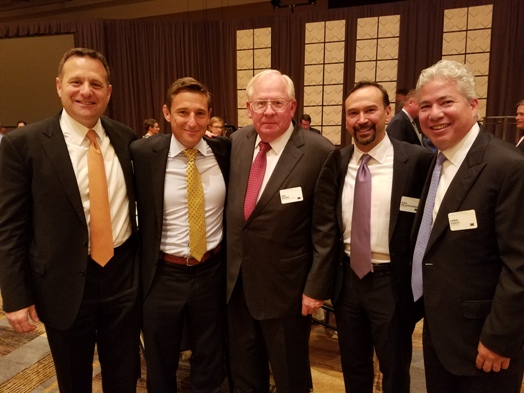 He thanked his wife of nearly 50 years, Janice. “She can rightfully take credit for anything I might have accomplished in life, and she has been my life partner, beginning when we were 14 and 15 years old,” said Myers. “I love her heart and soul.”

Myers thanked his old Army buddy, retired Brig. Gen. John Walsh, for his friendship and service, noting his 30 years of service, multiple combat tours and many decorations. “This man is a true American hero,” he said.

He also recognized Casey’s past leaders, including founder Don Lamberti and former CEO Ron Lamb, who passed away in 2010, and thanked them for seeing his potential.

“I had no aspirations to be the CEO,” said Myers. “I just wanted to do a good job at a great company.”

Myers asked the dozens of Casey’s team leaders and senior management, including some who have been with the company nearly 40 years, to stand for recognition. And he returned Handley’s praise, noting his character, integrity and understanding of what a great resource Casey’s thousands of team members are to the company.

“To be in the position to positively affect the lives of so many people in so many different ways, it’s truly a blessing,” said Myers. “To impart to others the importance of people, whether shareholders, customers or team members, is truly a gift. To put the needs of others before your own needs, to give others credit for their hard work, to create an environment that allows others to succeed, and to remember that the collective wisdom of the group is far, far, greater than the wisdom of a single individual. Besides that, it’s just good for business.”