LAVAL, Quebec – Beginning now with 12 convenience stores from a new acquisition in Indiana and moving in 2016 to the 1,550 c-stores acquired from The Pantry in the U.S. Southeast, Alimentation Couche-Tard Inc. is consolidating its Circle K, Statoil, Mac's and Kangaroo Express retail brands under one refreshed global banner, creating a new, global convenience brand, Circle K. 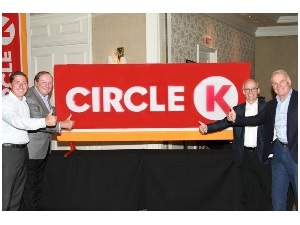 “We operate in over 15,000 locations, in over 20 countries globally,” president and CEO Brian Hannasch said during a media call to offer details on the initiative. “We have over 100,000 employees and associates serving our customers each and every day. We serve over six million customers each and every day. Today, we have revenue exceeding $35 billion in U.S. dollars. … Our story is one of both organic growth and also growing by acquisition. We’re not outperforming the market by a little, we’re outperforming the market by a lot. We’ve had a good run, but … where do we go from here?”

He added, “As we’ve continued to grow, we’ve been faced with a significant question. Do we continue the recipe which we’ve had, which is a company of companies, or do we join together to become one company, one business?”

The answer: The existing Circle K is already Couche-Tard’s largest and most international brand. As reported in a 21st Century Smoke/CSP Daily News Flash, the new Circle K brand will replace Couche-Tard's existing Circle K, Statoil, Mac's and Kangaroo Express branding on its convenience stores and gas stations across Canada, the United States, Scandinavia and Central and Eastern Europe. The new Circle K brand will also appear on licensed stores across Asia.

(One exception: “The owl stays,” said Hannasch. Laval, Québec-based Couche-Tard has chosen to retain the company's founding Couche-Tard retail brand in Québec due to the history and specifics of that market. And he said emphatically that the company will “remain Couche-Tard” and not change its corporate name to Circle K.)

“This is not about simply combining two brands in the Southeast and rebranding Kangaroo Express to Circle K,” he said. “It is about creating a new, global brand together. Adopting a single global brand will make us stronger, reinforce our culture and help us focus on [customer service]. … It’s about taking a little bit from each of the brands that we have, that we use around the world today, and making it a part of what we think is a refreshed, new and improved and more timeless Circle K logo.”

Taking the lead for the Kangaroo Express transformation is Darrell Davis, senior vice president of operations for Couche-Tard.

“This is an exciting time for Kangaroo Express locations and communities, as they are amongst the first in the world to adopt the new Circle K brand,” he said. “This is much more than a signage exercise. With this global transition we are strengthening our identity and the experience we will offer to all of our guests.”

The brand consolidation will lead to best-practice sharing, the company said, and it will enhance benchmarking across international boundaries; the business will have opportunities to benefit further from economies of scale and a simplified brand portfolio. It will “make the synergies come to the market even more quickly than they have in the past,” Hannasch said. “A core part of our DNA is to share best practices globally.”

The company will complete the Kangaroo Express rebranding, as well as that of the traditional Circle K stores in that same region, to the new Circle K brand within six to nine months.

As of July 19, 2015, Couche-Tard's network comprised 7,987 convenience stores throughout North America, including 6,556 stores offering road transportation fuel. Its North American network consists of 15 business units, including 11 in the United States covering 41 States and four in Canada covering all 10 provinces.

In Europe, Couche-Tard operates a retail network across Scandinavia (Norway, Sweden and Denmark), Poland, the Baltics (Estonia, Latvia and Lithuania) and Russia. As at July 19, 2015, it comprised 2,229 stores, the majority of which offer road transportation fuel and convenience-store products while the others are unmanned automated gas stations that offer road transportation fuel only. The corporation also offers other products, including stationary energy, marine fuel, lubricants and chemicals. Couche-Tard operates key fuel terminals and fuel depots in six countries.

In addition, about 4,700 stores are operated by independent operators under the Circle K banner in 12 other countries or regions worldwide (China, Guam, Honduras, Hong Kong, Indonesia, Japan, Macau, Malaysia, Mexico, the Philippines, the United Arab Emirates and Vietnam), which brings to more than 14,900 the number of sites in Couche-Tard's network.