LAVAL, Quebec – Coincidentally, both logos prominently feature a red “K.” But the Kangaroo will disappear, at least from the logo. Alimentation Couche-Tard Inc. said it will rebrand the approximately 1,500 Kangaroo Express convenience stores that it picked up from The Pantry Inc. in early 2015 to Circle K. 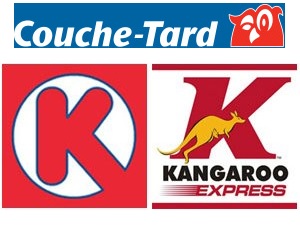 Brian Hannasch, president and CEO of Laval, Quebec-based Couche-Tard, confirmed the move during the company’s fiscal first-quarter 2016 earnings call on September 1. “We’ve made no brand harmonization efforts to date, but we have made the decision: We will be using the Circle K brand in the U.S. going forward as our convenience-store brand," Hannasch said.

“We’re very excited about the opportunity to combine the two networks in the Southeast,” he continued. “We’re very pleased with the integration of The Pantry. It’s a huge change effort on a lot of fronts, and I couldn’t be more pleased with the results the team is delivering.”

Rebranding will begin in January 2016 and continue over the following six to nine months, said Hannasch.

The Pantry sites have been fully incorporated into four existing and a new fifth business unit. In the process, Couche-Tard has introduced Circle K’s Polar Pop fountain brand to 100 of the newly acquired sites over the last 45 days and plans to roll it out to an additional 900 sites in this fiscal year, in advance of the store brand change.

Couche-Tard is also well into aligning its retail pricing inside the stores and out. “We’re confident we’re going to see certainly increased consumer awareness, which will drive synergies on the top line, as we dramatically grow our market share in the four to five core Pantry states,” he said.

“We’ve aligned certainly from a merchandised procurement standpoint as we talked about synergies being generated there, but also well underway in terms of aligning retail pricing both inside and outside the store,’ Hannasch said. “I can’t give a forecast on results, but we’re very confident that the synergies of combining the two networks is creating a very high market share and high consumer awareness in these markets.”

He concluded, “If nothing else … The Pantry network needed a facelift.”

As of July 19, 2015, Couche-Tard’s network included 7,987 convenience stores throughout North America, including 6,556 stores offering fuel. Its North American network consists of 15 business units, including 11 in the United States covering 41 states (under the Circle K and Kangaroo Express flags) and four in Canada covering all 10 provinces (under the Mac’s and Couche-Tard flags).

In Europe, Couche-Tard operates a broad retail network across Scandinavia (Norway, Sweden and Denmark), Poland, the Baltics (Estonia, Latvia and Lithuania) and Russia. In addition, about 4,700 stores are operated by independent operators under the Circle K banner in 12 other countries or regions worldwide (China, Guam, Honduras, Hong Kong, Indonesia, Japan, Macau, Malaysia, Mexico, the Philippines, the United Arab Emirates and Vietnam), which brings to more than 14,900 the number of sites in Couche-Tard’s network.