BENTONVILLE, Ark. -- An expanded foodservice and beverage offering is the differentiator for Wal-Mart Stores Inc.’s latest convenience-store concept, this one designed for its Supercenter properties. The two pilot locations are in Rogers, Ark., and Crowley, Texas.

At 2,500 square feet, the yet-to-be-named stores—which opened in late January—are larger than the company’s previous fuel kiosks located in the parking lots of many of its Supercenters. 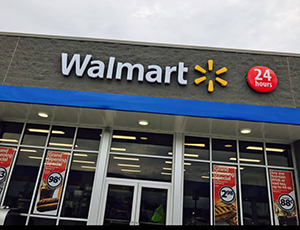 The Rogers store offers a hot-food bar where customers can grab paninis, nachos, hot dogs or sausages, according to a report by The Arkansas Democrat-Gazette. It also offers premade sandwiches and salads. A walk-in cooler features domestic, imported and craft beer. Wal-Mart also has stocked the store with a few grocery staples such as milk, eggs, frozen meals and pizzas.

The stores each employ 12 people, and they are open daily from 5 a.m. until midnight. The gas pumps operate 24 hours a day.

Feedback led the retailer to consider larger store formats the past few years, he said. "Customers were asking us, 'Why don't you offer more?' " Narsey said.

Wal-Mart hopes the variety will lead to more sales. Narsey said value and speed is the goal, offering customers the chance to grab a variety of items quickly at Wal-Mart prices.

"We'll do a little bit of fine-tuning as we go along and get feedback from customers about what they like, what they think we could do better," Narsey said. "But I think this is about the comfortable size."

The company is also testing other c-store formats including Wal-Mart to Go in its hometown of Bentonville, Ark., and Wal-Mart Pickup With Fuel in Madison, Ala., and Thornton, Colo.

In early 2016, Wal-Mart curtailed a 20-year relationship with Murphy USA, announcing that going forward it would build and operate its own gas stations rather than continue to farm them out to the El Dorado, Ark.-based company. Murphy USA will continue to run the more than 1,000 branded locations it already has in Wal-Mart parking lots.

Wal-Mart would not comment on whether the company intends for the new Supercenter c-store format to be the replacement for those sites. “This offering is something we are testing,” Hatfield said. “But at this time, we have no announcements to make about any other possible locations of this type.”