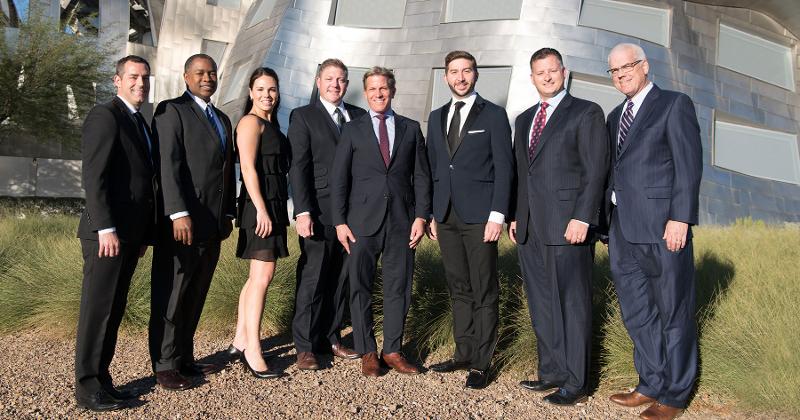 LAS VEGAS -- The setting for the 2018 CSP Retail Leader of the Year dinner and awards ceremony could not have provided a more striking contrast to its honoree, Kyle Krause, chairman and CEO of Kum & Go LC, West Des Moines, Iowa.

The event was held in the chaotic, interfolding steel facade of the Keep Memory Alive Event Center in Las Vegas, designed by famed modern architect Frank Gehry. Meanwhile, Krause has led Kum & Go on a straight path, from being an acquisition-driven, gas-and-convenience chain to a large-format, food-forward network destined to thrive in an age of disruption.

While the event recognized Krause’s achievements, it also reflected the influence of his father, the late William A. “Bill” Krause.

“We felt the spirit of Bill Krause during this wonderful event,” said Gus Olympidis, president of Family Express, Valparaiso, Ind. Bill and his father-in-law, the late Tony Gentle, pioneered the fl edgling concept of convenience retail by founding the West Des Moines, Iowa-based Kum & Go chain in 1959. The “K” and “G” in Kum & Go are from Krause and Gentle.

Joining Kyle to celebrate the award were his wife, Sharon; mother, Nancy; and two of his five children, sons Elliott and Tanner, the latter of whom was just named president of the 400-store chain.

The evening’s significance was not lost on a family fully invested in the vigor and relevance of the convenience channel.

“Maybe we’ll be back in 10 years for you,” Kyle told Tanner, “and then again 10 years after that,” referring to the daughter that Tanner and his wife, Hannah, are expecting this fall.

During a cocktail reception before dinner, about 300 retailers, suppliers and guests enjoyed the event space and reflected on the Krause family’s achievements. “Our industry has been graced by family businesses like Kum & Go that have blossomed, while serving communities in an impactful way,” Olympidis said. “The Krause family, in a multigenerational fashion, has been a credit to the c-store space and to the communities that they serve.”

Kyle follows several Retail Leader of the Year award recipients from family-run chains, including 2017 Retail Leader Ari Haseotes, president, CEO and director of Cumberland Farms, Westborough, Mass.; and 2009 honoree Carl Bolch Jr., former president and CEO of RaceTrac, Atlanta, both of whom were present at this year’s reception and dinner.

As the awards dinner was in full swing, construction workers back in Des Moines, Iowa, were putting the finishing touches on the Krause family’s own tribute to its Midwestern roots with the Krause Gateway Center, a three-story, all-glass structure in downtown Des Moines that will house the next generation of Kum & Go leaders. The 159,000-square-foot space doubles the size of the chain’s current West Des Moines offices and is the creation of Renzo Piano, the Italian architect of The Shard in London and the Whitney Museum of American Art in New York.

Mirroring that inspired visual dynamic, the event center in Las Vegas off ered dinner guests a soaring ambiance, with its rippled white walls and curving grid of windows lit in warm reds and purples surging into a three-story, vaulted ceiling.

“We felt the spirit of Bill Krause during this wonderful event.”

The actual awards ceremony started with greetings from CSP’s Jim Bursch, group president of convenience media and events, and Mitch Morrison, vice president of retailer relations, both of whom welcomed the Kum & Go leadership team and industry guests.

The night’s highlight was a 20-minute video, which was shot over three months and included interviews with about a dozen of Kyle’s family, friends and industry colleagues.

Among them were the heads of local and national businesses, including Dan Houston, chairman, president and CEO of Principal Financial Group, Des Moines; Kelly Housby, partner with Housby Mack Inc., also based in Des Moines; and Dan Keough, chairman and CEO of Holmes Murphy & Associates, Waukee, Iowa.

They described Kyle as a no-nonsense businessman, focused on numbers but always cognizant of what inspires people to do better. Keough met Kyle along with his father at a meeting where Keough was introducing a new insurance concept to the family. Bill was initially cautious, but Kyle challenged his father on it, Keough said.

“Kyle reminded his dad that he owned banks and c-stores, so why not an insurance company?” Keough said. “It turned out to be a great thing for Kum & Go, something that influenced a lot of people in the industry.”

Keough described Kyle as having a focused, clear vision and someone who can break down barriers to achieve the direction he wants to take. “Kyle thinks differently than most people,” Keough said. “He sees obstacles and then allows people to look around the corner.”

Kyle’s inspiration comes from multiple sources, including contemporary art, soccer and Italy. These interests led to his involvement with the local art scene, ownership of the Des Moines Menace soccer team and an investment in two Italian vineyards.

But beyond his diverse interests, Kyle has focused on the family business, applying an intellectual clarity and a nurturing patience to the vision he had for the chain’s prosperity. In the video, Craig Bergstrom, CFO of Kum & Go, described how the chain evolved from legacy, small-format locations to 6,000-square-foot stores in 11 states.

Though the chain’s store count of 400 has remained roughly the same since Kyle took over the family business in 2004, it now has 2.5 times more revenue per store than 10 years ago, makes five times more in earnings and has quintupled foodservice to 20% of inside sales. Company revenue in 2017 hit $2.4 billion.

While the store count has been static due to closings and new builds, the pace of growth has ramped up under Kyle. During the first 44 years of Kum & Go, the chain built 25 stores, Bergstrom said. Since Kyle has been in charge, the chain has built 250 new locations.

Being a family business helped that calculated, thoughtful transformation, Bergstrom said. When he started as CFO in 2005, Bergstrom was concerned about the highly leveraged ground-ups and their ability to return a profit. Kyle reassured Bergstrom that a family business could afford the time it took to validate his vision, and in time, he made Bergstrom a believer.

Niki DePhillips, senior vice president of store development, cited Kum & Go’s charitable work, and that it gives 10% of profits back to area communities. It also participates in a food-bank program that donates unsold food from the stores to needy families.

Click here to view a photo gallery from CSP's 2018 Retail Leader of the Year dinner.

After the formal video, Mark McManigal, former in-house general counsel for Kum & Go, took the stage to recount moments from his 35 years of knowing Kyle. “Having started in the business at 9 years old, it’s safe to say that c-stores were in [Kyle’s] DNA,” he said.

McManigal lauded Kyle for learning from his father and grandfather, and introducing larger-format stores built to Leadership in Environmental and Energy Design (LEED) standards, with “Go Fresh” foodservice locations “to transition into the 21st century.”

When Tanner took the stage, he joked that CSP had asked him to speak as both Kyle’s son and in his new lead role with the company. “They got two for the price of one,” he said.

Tanner described his father as incredibly supportive of his and his siblings’ interests, be it soccer games or art gallery openings.

He was always there despite his hectic business schedule.

“You never pressured us to join the family business,” Tanner said to his father from the stage. “It was more that you forced us to be what we wanted.”

Having lived and now worked with his father, Tanner said he always felt his dad was a “retail leader.”

Then Kyle took the stage, thanking CSP; Kum & Go associates at the gala, in the stores and back in West Des Moines; his friends who made the trip to Vegas; and his family.

“I’m blessed to have had that seat side by side with my father and grandfather,” Kyle said. “And to the 5,000 great associates who are making days better every day, I thank you. I’m representing you.”

2018 Retail Leader of the Year: Kyle Krause Builds a Legacy

Kum & Go's Gateway to the Future