ORLANDO, Fla. -- It was nearly 10 years in the making, but Wawa Inc.'s first site in Florida is finally ready for its closeup. Today, Wawa is holding the grand opening of its first Florida convenience store, located at Central Florida Parkway and International Drive in Orange County, Fla., across from SeaWorld Orlando. 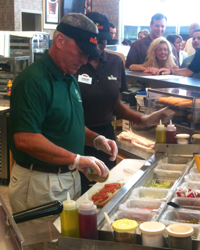 The entire event will be streamed live, through www.wawa.com.

As reported in a Raymond James/CSP Daily News Flash, Wawa held a VIP sneak preview yesterday for the media.

"We looked all around the country and found Florida is our future," Wawa president Chris Gheysens told the approximately 80 attendees. "We plan to build 20 to 30 new stores in the next year, and 100 stores in five years. We will take the time to do new stores from the ground up."

Wawa CEO Howard Stoeckel said, "At Wawa, we're about simplifying lives. We want to be part of your daily routine here in this marketplace. We want to be important here. We want to make Wawaland here. We have done our due diligence."

At the sneak preview, Dyer build the ceremonial first Florida hoagie and present it to a representative of Second Harvest Food Bank (illustrating Wawa's commitment to "lend a helping hoagie").

The site exemplifies the chain's newest prototype, making a huge foodservice statement right as the customer enters the store. Its 4,600 square feet of retail space features:

The grand opening event will also kick off Wawa's partnership with the Second Harvest Food Bank of Central Florida. Wawa has committed to donating a portion of hoagie sales for its first five Florida stores (up to $5,000 per store) to Second Harvest, with a goal to raise and donate $25,000 in five weeks time.

"We are thrilled to finally open our doors and share this momentous occasion with honored friends and guests, and are ecstatic to welcome our new Orlando customers to enjoy our unique brand of appetizing convenience," said Stoeckel. "We are passionate about extending our commitment to being a good neighbor and corporate citizen to the Sunshine State, and our partnership with Second Harvest Food Bank is just one example of how we will support local causes and people in the community."

The grand opening will kick off with Wawa associate Tamika Miller, a previous winner of a company-wide singing contest, performing the national anthem.

Stoeckel will then take center stage, discussing Wawa's culture and values. He will introduce the Wawa Through the Ages parade, which visually highlights Wawa's milestones. It will feature associates wearing oversized foam-board photos of everything from Wawa's famous milk man, to hoagies, to the evolution of coffee cups through the years.

The Wawa Values Parade will feature associates who have been nominated by their peers for exemplifying one of each of the six core values to be a part of the festivities. These associates will march holding up a sign of the value they represent.

Gheysens will then speak about the occasion and the expected local and community impact Wawa hopes to have throughout Central Florida.

Dyer will speak about the significance of Wawa to the local region and its commitment to community initiatives, including Second Harvest.

Scott will speak about the significance of Wawa's expansion to the state in terms of economic development and job growth.

"We can't wait to meet our new Florida family and are excited to quickly penetrate the Greater Orlando area and simplify our customers' loves," said Gheysens. "As each location opens, we will further solidify our commitment to filling a void in our new Florida customers' lives, providing them with a level of convenience and appetite appeal our customers have come to rely on us for."

The next four stores are scheduled to open in Orlando (July 25 and August 15) and Kissimmee (August 1 and August 8).