“Dawa means ‘welcome’ in my language,” owner Mike Han told The Courier Post. Han, who is Korean, opened the Dawa Food Mart a little more than two years ago in a largely industrial area between a rail line and the Passaic River in Paterson, N.J.

Wawa claims Han adopted the name Dawa in connection with convenience store and restaurant services despite knowledge of Wawa’s “prior exclusive rights” to the famous, trademarked name with a strong following among “devoted” consumers.

In court documents, the company cited “unsolicited media coverage” ranging from the ABC sitcom "The Goldbergs" to the Harvard Business Review as examples of its popularity.

The Dawa storefront sports a logo that resembles that of Wawa, replacing the flying Canadian goose image with a leaf. 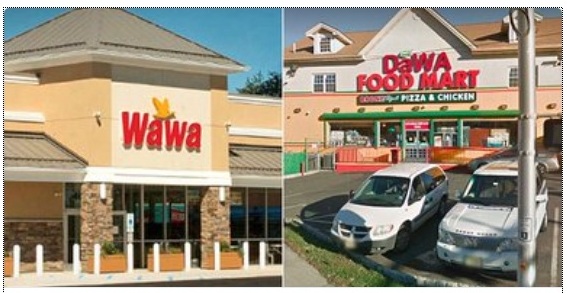 Wawa claims that the store’s name and trade dress is “virtually identical” with its own and that the goods and services each offers is “identical in kind and they move in similar channels of trade” and within its trade area.

The chain said the defendant’s use of Dawa “is likely to cause the public to believe, contrary to fact, that the defendant’s services offered under the name and mark Dawa are sponsored, licensed and/or otherwise approved by, or is in some way connected or affiliated with [Wawa].”

Wawa said Dawa has repeatedly ignored its requests to cease and desist from the infringement, and that Dawa “has engaged in the … complained-of acts willfully, deliberately and with an entire want of care as would raise the presumption of conscious indifference to its consequences.”

“We have an obligation to protect consumers from any likelihood of confusion … and to protect the brand name, goodwill and reputation that we’ve worked so hard to build over the past 50 years,” Wawa spokesperson Lori Bruce told the Courier Post.

“We wish them nothing but success,” she said. "Just without our name included."

Wawa, with headquarters in Wawa, Pa., has more than 730 convenience stores (500 with fuel) in Pennsylvania, New Jersey, Delaware, Maryland, Virginia and Florida.