When customers step inside any of Kwik Trip’s 527 convenience locations, they are met with products that seem somewhat out of place in a c-store setting. A cold case of meat, fresh vegetables and fruits are all strategically placed to convince shoppers that Kwik Trip is a valid place to stop and buy what they need for dinner. 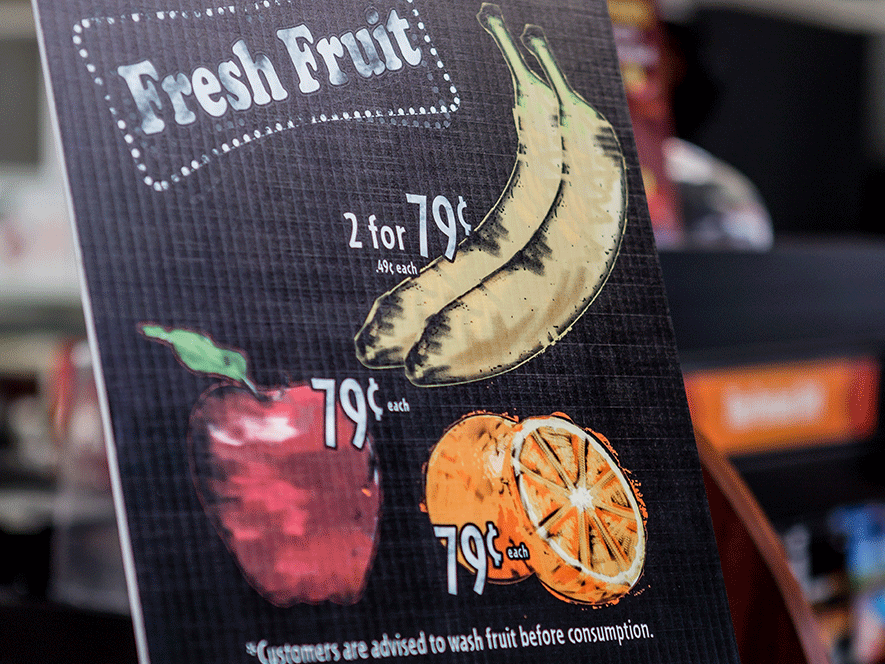 That’s why you hit them with it as soon as they walk in.

“Produce has a big presence on our endcaps so it’s really eye-catching. We try to keep the fresh cases near the front so guests can see what to expect when they come through the door,” says Erica Flint, a registered dietitian in Kwik Trip’s food research and development department at the operator’s headquarters in La Crosse, Wis.

Rutter’s Farm Stores in York, Pa., displays fruit such as bananas, oranges and apples, fruit baskets and flowers at the front of the store.

“It’s a big indicator that we’re in the fresh business,” says Ryan Krebs, the chain’s director of foodservice.

“Fuel sales kept rising and tobacco sales kept dropping, and we looked at the future to see what we could sell that was profitable,” Flint says.

Beyond commodity items such as milk, the chain innovated its offering with the addition of fresh meat, including ground beef, chicken, sausage, steaks and whatever’s in demand.

“[It] has allowed us to go from selling odds and ends of grocery to being really able to provide items that allow people to create a whole meal,” Flint says.

For Rutter’s, the goal is differentiation. “We’re looking at the seasonality of things—apple season, corn season—to see if we can be a destination and almost be treated like a roadside stand … because convenience stores aren’t looked at yet as a destination for whole produce,” Krebs says.

Krebs doesn’t expect Rutter’s to ever carry a huge array of fresh grocery products, though he plans to grow this category “to see if customers would take the risk of buying whole veggies for take-home use,”

he says. It will operate more as a roadside stand, with a limited/seasonal selection. As the program expands, Krebs expects it to be merchandised in the center store in wooden baskets or crates.

An ancillary benefit of fresh grocery products is that it aligns perfectly with Rutter’s robust foodservice program, which includes breakfast sandwiches, subs and salads. “You build trust with customers and remind them that we have a fresh made-to-order program with quality food,” Krebs says.

Green Zebra Grocery has three stores in the Portland, Ore., area, including one on the Portland State University campus. About 10% to 12% of sales come from produce. However, it is a modern c-store chain, featuring an array of grocery, freshly prepared foods (which provide 22% of sales) and even a growler and kombucha filling station.

“We look at produce as an opportunity to have a conversation,” says founder and CEO Lisa Sedlar. “People shop by the meals nowadays, and we’re not dependent on the big stock-up trip like the big grocers. And we offer a curated selection: We’ve done the hard work of determining which products are the best and the most affordable.”

Similar to Rutter’s and Kwik Trip, Green Zebra merchandises its produce outside when it can, along with fresh flowers.

Fresh grocery, says Brian Numainville, principal for The Retail Feedback Group in Lake Success, N.Y., “is growing because everyone is trying to crack the same code: How do we meet customers where they are in a place where we are?”

He recommends that stores getting into grocery start with the basics, “carrying a thin number of SKUs across a wide range of product categories, such as one or two kinds of apples instead of five.” But don’t be afraid to ask for input, he says. Ask suppliers what sells best, or ask customers on social media what they want to buy.

“Look at what is shopped for in supermarkets with the most frequency and focus there,” says Neil Stern, senior partner with McMillan Doolittle, a retail consulting firm in Chicago. “Milk, eggs, bread, beverages are the more traditional categories that meet this criteria, but look to data that shows what’s purchased through express lanes to give clues.”

One of the drawbacks of a fresh grocery program obviously is waste. And it’s essential to train staff to pull out anything that’s not fresh and to rotate everything, says Numainville.

“Nothing will ruin the perception of freshness faster than produce past its prime,” he says. “Quality is non-negotiable. If that’s not there, nothing else is going to matter.”

Kwik Trip circumvents much of this by owning its own dairy, bakery, beverage plant (where the company bottles water and produces private-label soft drinks) and commissary, “so we have a lot of our own items plus our own distribution center,” Flint says. “Since we self-distribute, waste isn’t a problem. We deliver 365 days a year and stores can order smaller amounts, which is really an asset for the grocery program.”

“Spoilage is a cost of doing business that should be budgeted into your annual budget—that you’ll lose this percentage to gain this amount of business. But you have to control it,” he says. “We hold our stores accountable for having too low of a spoilage. If there’s not enough, there’s insufficient diversity or variety out for our customers. If your volume is large enough, spoilage takes care of itself. That spoilage spend can be worth the volume and the margins on the other side.”

Sedlar of Green Zebra agrees: “Spoilage is an issue, but it’s part of being in the fresh grocery business. You’re always trying to manage your shrink, so studying your movement and sales is critical.”

One issue with grocery products is keeping prices competitive. Kwik Trip offers everyday low pricing on commodity items such as bananas, potatoes and onions, “which helps drive guests to our stores, and the rest [of fresh grocery] we try to price competitively so it doesn’t sit on the shelves,” Flint says.

“We keep the everyday low prices low and the margin might be smaller, but that’s intentional,” she says. “Other things have larger margins. We work with our manufacturers like Kraft to monitor pricing and see what others in our area are doing so we can keep things competitive so we’re not pricing ourselves out of the market.”

For Rutter’s, the fresh-grocery margins are low. Instead of measuring loss, Krebs says, look at what else customers are buying while they are in the store, and view it as a gain.

At Green Zebra, the gross margins on fresh grocery are about 35%, and prices are competitive with local grocery stores.

Because consumers don’t naturally think of a convenience store when considering where to buy fresh grocery, retailers need to take extra steps to get the word out.

Kwik Trip uses pumptoppers to advertise commodity items, which draws people in. And anytime a store opens in a new market, the chain runs grocery advertising and grand-opening advertisements outside the stores, often offering to give away a free pound of produce. Of course, the retailer runs media commercials and social media, email and text campaigns, too.

To draw people in, stores also offer a free piece of produce for people who come in at the beginning of the year “since everyone is starting resolutions,” Flint says. And promos throughout the year might offer three items for $1 to highlight the fresh program.

At the end of the day, “don’t try to be everything when it comes to fresh grocery,” says Stern of McMillan Doolittle. “Instead, focus on key parts that a c-store could potentially deliver, such as snack fruits—like banana or apples—or salad fixings like bagged salads and precut vegetables.”

Kwik Trip offers the basics in fresh grocery but does carry some seasonal produce such as cherries, strawberries and peaches “just to keep it interesting for our guests,” says Erica Flint, registered dietitian in the food research and development department of the La Crosse, Wis.-based company.

Beyond mastering the basics, cross-merchandising fresh grocery is also important.

“We put accompaniments in the meat case so we don’t send guests looking for those things,” she says. This might include mashed potatoes, taco seasoning, mushrooms, heads or bags of lettuce near the meat—or a guacamole mix near the avocados. “It really helps our guests to not run around the store, and it gives them ideas.”

Cross-merchandising is everywhere in the three Green Zebra Groceries in Portland, Ore., from fresh mozzarella and baguettes near the tomatoes, to lemons with seafood, crackers with cheese, and barbecue sauce near the meats.

“It gets an additional sale and gets customers thinking of these things,” says founder and CEO Lisa Sedlar.