For an industry built on prioritizing convenience, supporting healthier lifestyles is as much about changing consumer perceptions as it is about the logistics of stocking and moving more fresh, nourishing food options. 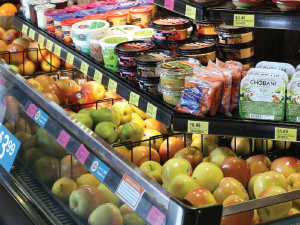 And yet the six convenience-store chains—with more than 1,000 locations combined—that have partnered with the nonprofit Partnership for a Healthier America (PHA) are finding that the challenges of sourcing, merchandising and selling healthier options could pay off in the form of vastly growing their target market.

“The biggest thing we noticed since focusing more on fresh was I could walk into any of our stores any morning and see women and young adults shopping our food—not for hot dogs, but for salads, yogurt parfaits and fruit cups,” says Perry Cheatham, chief operating officer of U-Gas and Gigi’s Café Express, Fenton, Mo. “What we realized through PHA is if we can expand those offerings and they qualify as healthy, we can really grow our demographic.”

PHA, created in conjunction with (but separate from) first lady Michelle Obama’s Let’s Move! campaign, brokers commitments with the public and private sector to develop strategies for addressing obesity. In addition to U-Gas, Vintner’s Distributors Inc., KwikTrip, Sheetz, enmarket and Tri Star Energy’s Twice Daily have committed to selling and marketing more healthy options, such as produce, low-sodium snacks, whole grains and low-fat dairy. At press time, McLane Co. Inc. announced it had signed on as a partner, pledging to enhance the heather-for-you offerings it supplies to retailers.

“We knew it was a bit risky getting into such a different retail space, but the convenience sector is so critical just because of the sheer number of Americans who walk into a c-store each day,” says Amaris Bradley, registered dietitian and senior manager for PHA, Washington, D.C.

About 160 million Americans enter a c-store each day, and 53% of U.S. consumers say they’d visit c-stores more often if there were healthier options, according to a NACS survey. Add to that the sheer number of c-store outlets compared to any other retail channel, and the opportunity to expand into better-for-you choices seems obvious.

Fremont, Calif.-based Vintner’s signed on with PHA in February 2015 following the 2013 launch of its Loop Neighborhood markets, created with the explicit aim of reaching more millennials and women.

“You can’t do everything by PHA standards and expect to be viable.”

“We set out to redefine convenience food, and in order to do that we have to offer what the consumer we’re going after wants,” says chief operating officer Pervez Pir. “But you also can’t do everything by PHA standards and expect to be viable. You don’t want to isolate your core customer, and sometimes indulgent items are a good thing.”

So how can a store entice health-conscious consumers to come inside when they haven’t historically associated the location with fresh, wholesome food items? La Crosse, Wis.-based Kwik Trip had long been affectionately known as “the banana place” when it became the first c-store to partner with PHA in 2014 (as part of a commitment to healthier food that also included hiring in-house dietitian Erica Flint).

The chain sells about 400 pounds of bananas per store per day, which are self-distributed to stores daily and ripened for several days in its banana-ripening facility before hitting shelves. Such success with a single piece of fruit led Flint to believe there was room for improvement.

“The bananas are really where we started,” she says. “That was dipping our toe in the water in the sense of: Can a gas station sell these kinds of products?”

The answer was yes. During its first year of PHA reporting, Kwik Trip notched a 5.5% increase in produce sales. “Now knowing these things will move, we’ve seen salads and other healthy offerings continue to get new life as we add them,” she says.

But being first to the program has come with roadblocks, such as meeting PHA-specified profiles for meal combos. Kwik Trip only just rolled out its first PHA-approved bundled meal—a hard-boiled egg, fruit cup and skim milk—which it had hoped to launch sooner during its first two-year contract period, but it needed an extension.

“It really highlights some changes we need from the industry in terms of products available,” Flint says.

U-Gas and Vintner’s also have struggled to come up with combos that satisfy PHA guidelines—whether that’s staying under the 500-calorie mark, keeping a lid on sodium or finding options that hit desirable prices.

“To expand and give more portions that taste good, meet the guidelines and fall within

but we’re kind of the lone rangers out there. Until more people jump on PHA or  better-for-you, there’s no halo effect, so you become that Whole Foods equivalent, better known as ‘Whole Paycheck.’ ”

“But being that we were already on that path toward better-for-you, this is a natural progression and something we want to commit to,” he says.

Distribution is a tough challenge facing an industry with roots that aren’t in fresh. Having a 10,000-square-foot commissary makes it easier for U-Gas to supply stores with perishable items as needed and control shrink. Similarly, vertically integrated Kwik Trip is able to self-distribute produce daily based on need.

But for a lot of smaller chains, “just ensuring fresh apples can be delivered often enough, or keeping fresh produce moving as needed is a challenge,” Bradley says. PHA is looking to partner with some major national distributors to mitigate such problems.

In the meantime, operators have found creative solutions. When designing its Loop stores, Vintner’s partnered with the same vendors who provide food to grocery retailers Trader Joe’s and Whole Foods Market.

Some c-stores in Philadelphia are getting produce through members-only wholesale food supplier Jetro, while one c-store with a farmers market on its property has made a deal for a portion of the product left at the market’s close, according to NACS.

When it comes to marketing fresh items, attractive merchandising is half the battle, which is why Jeff Lenard, vice president of strategy initiatives for NACS, calls the open-air fresh case a potential “game changer” for c-stores.

“Every other retail channel sells beverages and snacks at the register, but those are largely packaged snacks and drinks,” Lenard says. “They aren’t equipped to have a fresh case with cut fruit, boiled eggs, yogurt, hummus and commissary-made sandwiches. That’s our big opportunity.”

The first things customers see when they enter a Kwik Trip store are racks full of whole produce and an open-air fresh case stocked with six to eight varieties of cut fruit,  hummus and yogurt. So healthy impulse buys are easily within reach, Flint says.

Because the chain promotes low prices on whole fruit and vegetables such as bananas, onions and potatoes (39 cents per pound every day) supported by billboard and pump-top ads, shoppers are increasingly using Kwik Trip as a makeshift grocery store.

“More millennials are shopping in a hurry and shopping c-stores as a result,” Flint says. “But so many people still have that misconception that c-stores just sell big sodas and cigarettes. Sure they do, but wouldn’t it be great if a wider variety of healthy offerings were the norm?”

Are You Fit for Fresh?

NACS, along with the United Fresh Produce Association, which represents produce suppliers, created a 10-item checklist to help c-stores determine whether a fresh-produce program would be successful in their stores. Read on for the top five, and click here for the rest of the list.

1. Customer base: Women and millennials seek out “fresh” most. Are you attracting them?

3. Traffic patterns: Examine heavy-traffic dayparts and demographics associated with them to find opportunities to sell produce.

4. Location: Are you near a college/university, hospital or upscale residential area? These groups may be more likely to purchase produce for snacks. Are you in an urban/rural food desert? These groups may support more pantry sales/bulk produce purchases.

5. Distribution: Do you receive at least two deliveries per week, or can you find alternative distribution to manage the added complexity?