SACRAMENTO, Calif. -- Restaurant owner Gary Honeycutt says a push in California's state Legislature to ban the plastic foam containers he uses to serve up takeout meals could cost him thousands of dollars in an industry where profit margins already are razor thin, according to a report from Associated Press. 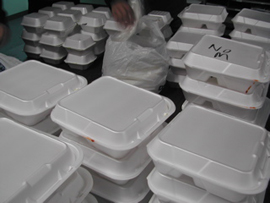 BJ's Kountry Kitchen, in the heart of California's farm country, uses about 26,000 of the 9-inch foam clamshells a year, mostly for takeout by the customers who come in for the restaurant's popular breakfast omelets.

"We put cheese on those omelets. And when we put the cheese on, it's really hot and bubbly and it goes right through the biodegradable stuff," he told AP. He expects his costs would more than double if the state requires him to use only biodegradable cartons.

The bill by Democratic state Sen. Alan Lowenthal, would prohibit restaurants, grocery stores and other vendors from dispensing food in expanded polystyrene containers, commonly known as Styrofoam, beginning in 2016. If signed into law, the measure would make California the first to institute a statewide ban on such containers. More than 50 California cities and counties already have similar bans.

Lowenthal said litter from the foam containers is one of the most abundant forms of debris found in city streets, sewers and beaches.

"It's not biodegradable, it's not compostable, and if it's in the water for a long time, it breaks up into small beads and lasts for thousands of years. It costs millions to clean up beaches," he said.

Opponents of the bill say it fails to address the root cause of litter: the litterers themselves. Litterbugs will toss out the containers whether they're made of polystyrene or biodegradable cardboard, said Michael Westerfield, corporate director of recycling for Dart Container.

"At the end of the day, people that litter don't care what type of product they're littering," he said.

SB568 was approved in June by the state Senate and is now being considered in the Assembly.