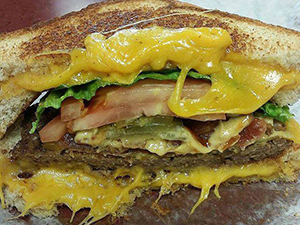 The Route 30 Burger will give Rutter’s customers the opportunity to enjoy two full toasted to perfection grilled cheese sandwiches serving as the “buns” with the choice of one, two, or three one-third pound 100% Angus Beef Burgers inside. The burger pays homage to the original Rutter family farm and current corporate headquarters located just a few blocks away from the major interstate.

At 3,073 miles, Route 30 is the third-longest route across the United States, and this burger stacks up to be the largest offered at Rutter’s convenience stores.

This comes standard with bacon and melted cheese on each burger layer. Rutter’s customers can add "endless" toppings such as first-cut pastrami, hot beef brisket and hot corned beef to accompany each layer. Non meat-eating customers will also have the choice of Rutter’s new Chipotle Black Bean Veggie Burger alongside freshly prepared veggies and the grilled cheese “buns.”

Rutter’s has created a contest to promote the Route 30 Burger. Anyone can upload a picture of their burger to their favorite social media site using #rt30burgercontest for a chance to win a $500 Rutter’s gift card. The chain will declare the person to get the most votes on their photo as the winner.

“At Rutter’s, food quality and creativity are at the core of our philosophy. We strive to create separators that beg to ask the question, 'Why go anywhere else?'. The Route 30 Burger with its high quality ingredients and fully customizable options emphatically answer the question, drive to Rutter’s,” said Ryan Krebs, Rutter’s director of foodservice.

The Route 30 Burger joins the chain's other signature offerings including the Ultimate Burgers, Bada Bing Shrimp and Loaded Mashed Potatoes on the menu.

In other company news, Rutter’s has again earned the No. 3 rank on The Central Penn Business Journal’s 2015 list of Top 100 Private Companies in Central Pennsylvania.

All I Really Need to Know I Learned From Jerry Weiner