OAKBROOK TERRACE, Ill. -- Gone are the days of potato chips and stale candy being the only options dispensed from vending machines. Some companies are finding ways to give customers fresh, better-for-you options at the push of a button--without any human interaction, according to a Restaurant Business magazine report. 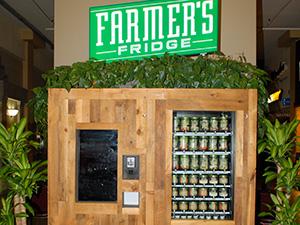 The machines are being placed in areas that are likely to see heavy foot traffic--office buildings, hotels and athletic centers--drawing in customers on the hunt for a simple grab-and-go solution at their convenience. New company Farmer’s Fridge launched its first vending machine this November in Garvey Food Court in Chicago’s Loop neighborhood that is connected to nearby office buildings via concourse. The machine is stocked daily with a variety of fresh salads and optional add-ons such as chicken, lemon tofu and tuna salad, along with healthful snacks such as sliced vegetables with hummus and sliced apples. Food is prepared each morning in an off-site kitchen and packaged in recyclable plastic jars, which can be returned through a slot on the machine.

Hotel chain Hilton Garden Inn similarly is giving its guests an anytime dining alternative to restaurants and room service with a new Crisp Market Machine installed in its Oakbrook Terrace, Ill., location. The machine, developed by Coinstar, is restocked several times a week by staff from the Crisp Market company. The vendor fills the machine with its fresh-made sandwiches, salads and parfaits, along with bottled water and soda 24 hours a day.

Vending machines have long been a part of consumers’ meal and snacking options, but the movement toward “fresh” and “healthful” offerings had previously been limited largely to schools where healthy options were top of mind. As the quality increases while the ease of purchase remains the same, fresh-focused vending machines in the commercial foodservice space are positioned to become a more attractive go-to for hurried diners, reports Restaurant Business. How will this affect quick-service and fast-casual operations that also thrive on providing fast, fresh options to consumers?

At least one operator already has joined in on the action: Smoothie chain Jamba Juice inserted itself into the nontraditional vending-machine market with its self-serve JambaGO vending machines. The machines initially launched in schools at the end of 2012; the retailer moved into the commercial market in 2013 and now has some 1,000 JambaGO units across the country, including in Target stores to capture the retail market. Through the machines, the chain is able to extend its reach without a full storefront or staff, instead selling its preblended smoothies in a much smaller space. Jamba CEO James White recently revealed to investors that the vending devices average $2,000 in sales, with a profit flow-through of 60% to 70%. He likened the money to "an annuity stream."