FRAMINGHAM, Mass.-- If someone starts stealing signs associated with your advertising campaign and taking photos with them--go with it. That's the advice of Mike Schneider, senior vice president at allen & gerritsen, according to a report by BostInno. 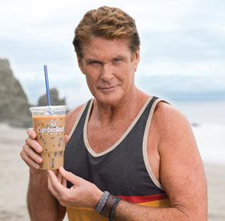 "What we are talking about is [going viral] and that's what everyone is striving for," Schneider told the newsletter. "You want to create engagement and you want people to share it."

Cumberland Farms recently launched a summer iced coffee campaign starring actor and pop culture icon David Hasselhoff. As part of the campaign, the convenience stores are sporting lifesize photo cutouts of the campy actor. About 550 of the cutouts have been pilfered from the stores in recent weeks.

Cumberland Farms representatives said they have had to replace the cardboard silhouettes of Hasselhoff on a daily basis, but as Schneider suggests, they welcomed the free--but slightly absurd--exposure.

Hasselhoff told WHDH-TV that at first, he thought he did something wrong. "The first thing I thought of was that I was in trouble and then I thought, 'Oh good they're not accusing me of stealing, they're accusing people of stealing me,'" Hasselhoff said. "When I found out that they were stealing them I laughed really hard because I thought it was pretty funny. I looked at the report ... that said 'ripped Hoff' and I thought, 'Aw that's nice, they're saying I'm still in good shape,' And then I realized people were stealing me."

Hasselhoff says he is flattered by the attention. "It's cool and it kind of humbles me that people are still following David Hasselhoff after all these years."

And in a bid to help the c-store chain, he has one last message for his fans: "I just hope nobody gets in trouble, but I encourage everybody to go out and see what they can do about stealing a Hoff but please have a cup of coffee while doing it."

"It's an extremely smart move for a company as long as no one is getting hurt," Schneider told BostInno. "It's an unexpected boost for a brand."

Marlo Fogelman, principal of Marlo Marketing, told the newsletter that the Hasselhoff debacle is a "blessing in disguise," but the company really had one of two choices--let it happen and go with it, or prosecute those who were running off with the signs.

"That would go viral as well, but not in a way that would benefit them," she said.

But companies like Cumberland Farms who are lucky enough to benefit from such impromptu marketing should be wary, said the report.

According to Fogelman, if the company tries too hard to take ownership of its viral nature, it will take the natural evolution of it out of the customer's hands.

"When something is viral it's viral…but it's one thing to respond positively to it happening and another thing to try and take the ownership back," she said. "Your customers are having fun with it, and it's authentic and genuine, and there's a way for a company to maintain that voice. There is also potential for a company to ruin that voice if they take it too far."

The Hoff Sings the Praises of Cumby's Farmhouse Blend