LOS ANGELES -- Now that it has completed the acquisition of a portfolio of 251 gas stations and convenience stores from Pacific Convenience & Fuels (PC&F), United Oil Co. will begin doing business as United Pacific. 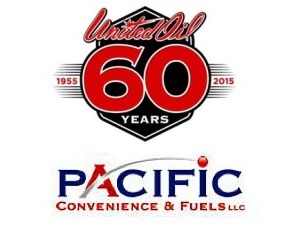 United Pacific's network will include 319 company-operated stores and 60 fee-operated and leased locations.

As reported in a 21st Century Smoke/CSP Daily News Flash, the acquired properties are located in California, Nevada, Oregon, Washington and Colorado. These convenience stores operate under the My Goods Market and Circle K brands and offer 76- and Conoco-branded motor fuels.

The majority of Pleasanton, Calif.-based PC&F's employees will become employees of United Pacific, which will have more than 2,500 employees.

"The combination of the two chains will provide for strong synergies and leverage the strengths of each organization,” Joe Juliano, president and CEO of United Pacific, said. “This acquisition significantly expands our retail presence in the Western U.S. and strategically positions our company for future growth."

The companies did not disclose the deal’s price tag.

United Oil, based in Gardena, Calif., was founded in 1948. It operates more than 130 sites in the Los Angeles and San Diego metropolitan areas. Some locations are branded by the fuel brand, while others carry the United Oil name, with the convenience stores branded We Got It! Food Mart.

Los Angeles-based United Pacific, through its retail convenience locations and its retail and wholesale fuel distribution network, has established itself as one of the largest independent owners, suppliers and operators of gas stations and convenience stores in the Western United States.

How the United Oil Bid Was Won (Part 2)

Pacific Profile, Pt. 3 PC&F Gets With the Program