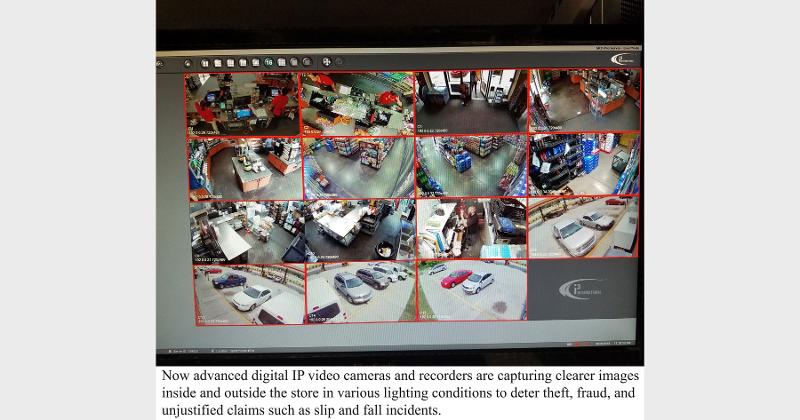 AUGUSTA, Ga. -- Convenience stores have traditionally installed surveillance cameras to deter crime and encourage safety, but too often these have provided images that lacked detail, particularly in low-light conditions. Retrieving video has usually been tedious, requiring endless searching and scanning to find the desired footage. Sharing and archiving of the video has also been cumbersome, wasting precious technical and management resources.

Now advanced digital IP (internet protocol) video cameras and recorders are capturing clearer images inside and outside the store in various lighting conditions to deter theft, fraud and unjustified claims such as slip-and-fall incidents. By providing easily retrievable surveillance video evidence that can be emailed, this approach is even enabling the swift collection of full compensation when store property is damaged. The surprisingly economical IP network surveillance systems are also enabling executives to efficiently monitor store conditions from home, headquarters or anywhere with an internet connection.

“With an advanced surveillance camera system, a convenience-store chain could achieve ROI within a year through better prevention of theft, fraud and unjustified claims as well as improved operational oversight,” said Todd Harrison, IT director, who oversees loss-prevention camera surveillance for Sprint Food Stores, which operates 20 convenience stores in Georgia and South Carolina.

As a solution, Harrison turned to an advanced surveillance camera system provided by ERC, a Jacksonville, Fla.-based supplier and integrator of surveillance and POS systems.

Sprint Food Stores' surveillance video system includes various high-resolution digital cameras, network video recorders and related equipment. This provides video coverage inside and outside of stores, the corporate office and remote offices, even in low-light/varying light conditions, and enables adjusting the angle or focus to capture the visual evidence required.

“ERC worked with us on exact camera placement and suggested slight adjustments to improve visibility and get the maximum coverage with the minimum number of cameras,” Harrison said.

One benefit of implementing the new surveillance system was that it eliminated “blind spots” within stores, such as inside a walk-in beer cooler, which made it easy to prevent theft and catch thieves, Harrison said.

“We put a camera inside the walk-in beer cooler and at other blind spots so we can monitor them at the front counter,” he said. “This prevents theft so we don’t have to prosecute, and provides video evidence if we do.”

Among the equipment installed in stores, Harrison said he appreciates a 3-megapixel fish-eye network camera that provides a 360-degree view over a web browser. This provides three simultaneous pan, tilt and zoom video streams that can be viewed live or recorded.

“The great part about the 360-degree view camera is being able to view the whole store,” says Harrison. “You can zoom in for a close-up of what you want to focus on, and quickly see which store camera has the best view.”

“The district manager may get alerts from the exception system if there are an extreme number of voids or no sales, so it may bring up 10 seconds of video after each to review,” Harrison said.

Deterring and disproving fraudulent claims is another benefit of implementing surveillance video. The information can be used to deter unwarranted claims for slip-and-fall or workers' compensation, for example.

“When a store was involved with a slip-and-fall claim, we were able to show on video that other customers took the same path as the accuser without incident, and that less harm was involved than stated,” Harrison said.  “We retrieved the video, sent it to her lawyer, and her lawyer dropped the case.”

Occasionally, patrons demand chargebacks, claiming that they did not make a purchase. Previously, managers had little recourse. Now this can be resolved much more effectively.

For instance, when a customer claimed that he could not possibly fit 20 gallons of gas in his Ford Escort, Harrison says the incident was resolved with a simple callback after reviewing some revealing video.

“We viewed him filling gas cans next to his car,” Harrison said.  “We asked, ‘Did you forget your two 5-gallon gas cans? We have you on video.’ That ended the dispute.”

Surveillance video can also be used as evidence to collect on damage to equipment or store property.

Harrison relates how at one location a truck driver ran into a 3-foot high LED diesel fuel sign, destroying it, before driving off.

“When we emailed the trucking company high-quality surveillance video of the incident with their truck/trailer number and company name clearly readable, we were promptly compensated,” Harrison said. “That alone paid for the store’s surveillance system.”

On another occasion, Sprint Food Stores had a storage building roof torn off by a truck just before dawn without the driver stopping to talk to anyone, Harrison said.

“Because our infrared cameras provided clear identifying information on the truck, we were able to quickly file a claim with the truck company and recover 100% of damages,” he said. “There was no delay in receiving payment because we had proof.”

Compared with the chain’s previous approach, implementation of the advanced system has significantly improved management.

“Video can be reviewed and archived remotely as needed, which eliminates the need to spend hours every week traveling to burn DVDs for video storage,” Harrison said.

The remote viewing of store video also gives the chain’s operations manager a window into how each store is doing without having to travel daily to each, he said. A quick glance, for instance, can help to verify that employees are in uniform, at their work stations and serving customers without long lines, etc.

The surveillance system also has an optional video analytics software module that could help Sprint Food Stores more effectively merchandise retail items, Harrison said. The chain is not currently using this option, but it may do so in the future, he said.

“The video analytics module would basically pinpoint where in the store people are traveling, where they stop and where they spend time, over time,” Harrison said. “So you can tell which products interest people the most, and how to improve product placement and merchandising.”

When c-store owners are ready to take theft/fraud prevention and operational efficiency to the next level with advanced video surveillance systems, they will often find that the most effective choice is to partner with a flexible vendor capable of installing a turnkey solution that integrates with their equipment to fully meet their needs.

Del Williams is a technical writer based in Torrance, Calif.