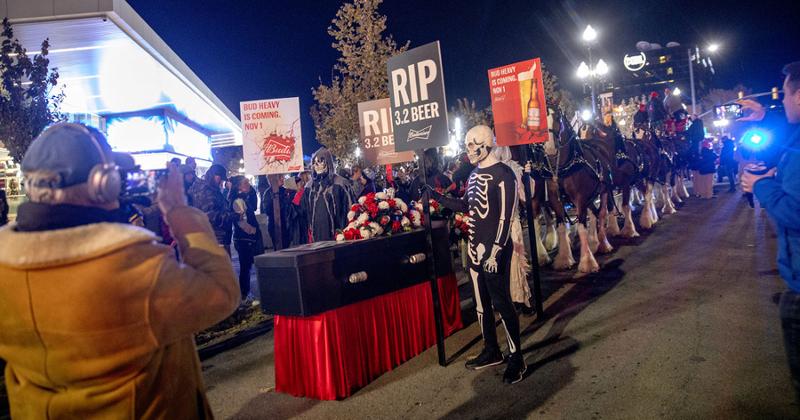 SALT LAKE CITY — The Budweiser Clydesdales recently made a stop in Salt Lake City to mark the end of an era.

As of Nov. 1, Utah’s cap on beer sold in convenience stores and grocery stores was raised from 3.2% to 4% alcohol by weight (or 5% alcohol by volume).

The horses, joined by a group of pallbearers in Halloween costumes, traveled in a mock funeral procession Wednesday to say goodbye to the old law. Customers can now drink the same Budweiser recipe sold in the rest of the country.

The Clydesdales visited bars where patrons crushed their 3.2-ounce beer cans, Budweiser said. The company, owned by St. Louis-based Anheuser-Busch, also has billboards in the area highlighting the change.

The tax on 31-gallon barrels of beer will rise from $12.80 to $13.10, per the new law. The increase will trickle down to drinkers, Jim Olsen, president of the Utah Beer Wholesalers Association, told The Salt Lake Tribune.

“It always gets passed on to consumers,” Olsen said.

Utah's Department of Alcoholic Beverage Control will still control the sale of stronger alcohol beverages outside of grocery and c-stores and on tap at restaurants and bars.

SB 132 was signed March 26 by Utah Gov. Gary Herbert and sponsored by Sen. Jerry Stevenson and Rep. John Knotwell. An early version of the bill would have raised the level to 4.8% alcohol by weight.

Utah was the last of two states, along with Minnesota, that limited retail beer sales to products with 3.2% alcohol. Full-strength beer became acceptable in Oklahoma in October 2018 and will be allowed in Colorado on Jan. 1, 2019.

The Digital Future of C-Stores