LEBANON, Pa. -- After decades of serving consumers across the East Coast, the rebranding of Hess convenience stores to Speedway is making headlines one store at a time. 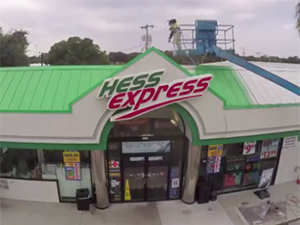 “The familiar green and white theme of Hess stores has given way to a new look across the … East Coast,” reported the Patriot News in Midstate, Pa.

Hess c-stores in the area were quickly transitioned to the Speedway brand recently, shaking up the local gas and convenience store landscape, the newspaper report.

The Lebanon, Pa., Daily News reported workers laboring through the snow this past week to change the signs on a Hess Express store to Speedway.

The changes come after Speedway, Enon, Ohio, expanded its reach from nine to 23 states with its acquisition of Hess retail operations and assets for $2.82 billion in September.

Speedway in now the nation's fourth-largest convenience-store chain since taking on the Hess retail assets. Hess was previously the largest operator of convenience stores on the East Coast and fifth-largest chain in the U.S, according to a Hess news release.

One thing most of the news reports also include: News of Hess’ annual toy truck release.

“Toy truck collectors, don't fear,” Patriot News noted, “the Hess Toy Truck, which celebrated its 50th anniversary in 2014, will be available online for 2015.

Here's a time-lapse video of the transformation from a Hess to a Speedway: