ORLANDO, Fla. -- After fighting City Hall for nearly a year and a half, two infamous gas stations/convenience stores near Orlando International Airport have now erected signs displaying their sky-high prices. But there's one problem, according to Orlando officials: Drivers can't see them. 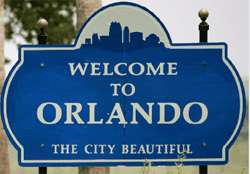 Code inspectors say it's the latest attempt by Suncoast Energys and Sun Gas to defy a city ordinance requiring stations near the airport to post prices visible to those driving by, according to a report in the Orlando Sentinel.

This past week, inspectors said they plan to ask the Code Enforcement Board to fine each station $1,000 a day until signs that comply with city guidelines are in place.

"We're trying to make sure consumers are aware of what they'll pay," Mayor Buddy Dyer said. "It's terrible getting these complaints from visitors who feel like they've been ripped off, who say, 'We had the time of our lives in Orlando, but we'll never come back.'"

The independently owned stations routinely charge among the highest fuel prices in the country—$5.69 per gallon earlier this week—but until recently posted prices only on the gas pump, not on large signs consumers are accustomed to seeing, according to the newspaper.

An ordinance adopted last year was meant to change that, but the stations' owners sued and only recently lost in court. They've put up signs, but Orlando officials say they don't meet the city standards because they're obscured.

At Suncoast Energy’s store, a squat monument sign has been placed behind a hedge, visible only to those already at the gas pumps, the newspaper states. Across the street at Sun Gas, the sign is well past the station's entrance, making it difficult for drivers to spot until they've passed the station.

"We don't believe it complies with the visibility requirements of the code," code enforcement manager Mike Rhodes told the newspaper.

But Sun Gas' attorney said the city code doesn't specify where on the property the sign should be placed. "The sign is visible from the roadway and in full compliance with the code," attorney Gus Benitez said. "They're just bullies; that's all this is."