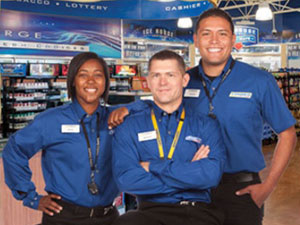 When San Antonio, Texas-based CST spun off of Valero on May 1, 2013, the new company entered the market as one of the largest publicly traded fuel and convenience merchandise retailers in North America. With nearly 1,900 locations in the United States and Canada, CST serves more than 1.4 million customers every day.

Over the past year, CST has achieved solid operational results and strengthened its financial position, reporting revenues of $12.8 billion, net income of $139 million and earnings of $1.84 per share. The company launched its growth initiatives by opening 29 new stores within its first 12 months as a standalone company.

To promote the company's business strategies, CST adopted a new mission statement, "To Delight More Customers Every Day," and has put more focus on supporting CST's more than 11,000 store-based employees.

CST's chairman and CEO, Kim Bowers, visited 100 stores in her first 100 days in office, and encourages all executives and professional staff spend a certain number of days each year working in stores through a program called Corner Store Time.

"Our achievements in our first year of operations have positioned us to grow organically and expand our business to increase our overall customer base, providing a solid foundation for our future," said Bowers. "For 2014, we are focused on creating even greater value for our shareholders by expanding our footprint, strengthening our Corner Store brand, increasing our operating margins and growing our wholesale business."

In June 2013, CST hosted a grand opening for its largest Corner Store to date, a 10,100-square-foot travel center in Three Rivers, Texas, an agricultural and oil field community in the heart of the Eagle Ford Shale. CST's strategy is to build more new stores from the ground up, allowing for larger, more spacious stores and a larger selection of hot and cold food and beverages.

Inside the stores, CST added 14 new items to its line of signature, private-label products, while also growing sales in Corner Store's fresh-baked goods, selling more than 1.2 million whoopie pies and 4.6 million kolaches in 2013. Capitalizing on the popularity of its whoopie pies, the company outfitted a food truck to introduce more fans to the sweet treats at festivals and events in the markets CST serves.

In the United States, CST's Corner Stores sell Valero fuels and a line of nearly 200 signature products under brand names such as U Force sports and energy drinks, Fresh Choices baked and packaged goods, Cibolo Mountain coffee and Flavors2Go soft drinks. In Canada, CST is the exclusive provider of Ultramar fuels and its Depanneur du Coin and Corner Stores sell signature Transit Cafe coffee and pastries.

In October, Fortune magazine named Bowers one of its 50 Most Powerful Women in Business and on Dec. 3, 2013, CST executives and board members traveled to New York to ring the bell on Wall Street and open trading on the floor of the New York Stock Exchange. In April of this year, the New York Times featured her management insights in its "Corner Office" column.

"CST's growing reputation for success is due to our over 11,000 hardworking Team Members who strive to make every visit to Corner Store a pleasant one for our customers," Bowers said.

Community service remained a priority for the new company, organizing diaper drives for women's shelters and volunteer opportunities for Team Members at nonprofit organizations, as well as raising money for flood and wildfire victims in Colorado and victims of a train derailment in Quebec earlier this year. Each year, Corner Stores across the nation collect millions each year for the Children's Miracle Network and Muscular Dystrophy Association while stores in Canada raise money for the Breast Cancer Foundation.

In August 2014, CST will roll out the Country Run presented by Corner Store, an eight-city series of 5K Run/Walk events to raise money for Big Brothers, Big Sisters and for local children's charities in each market.

"I am extremely proud of the successes and the many firsts we experienced in our inaugural year as a public company," Bowers said. "As we celebrate CST Brands' first anniversary, we must continue to work hard to evolve the Corner Store brand, create shareholder value, and, of course, delight more customers every day by going above and beyond their expectations."