Higgins began his career in 1967 with his father, Ralph Higgins, who had previously owned the first Stuckey's franchise in the country. At the time he formed the company, Fred Higgins was attending law school at the University of Kentucky in Lexington. By the time he graduated in 1969, he had expanded the operation to six stores in the Lexington area. After Higgins served in the army and returned to Bowling Green, Minit Mart Foods Inc., was incorporated in 1972 with 16 stores and began a planned growth program, acquiring single c-stores and selecting sites on which to build new Minit Marts.

In 1988, Minit Mart expanded its business to Tennessee when it acquired 19 Bread Box c-stores there. During this time, Minit Mart continued to build on its reputation as a pioneer in the c-store industry by adding delis, game machines and videotape rentals in its established stores. Minit Mart was among the first c-stores to add gasoline pumps, the group said.

By 1998, the Minit Mart banner was flying over 87 stores in Kentucky and Tennessee. The volume of the operation was in excess of $250 million dollars annually with approximately 1,200 employees.

With industry consolidation in 1999 and 2000, Higgins and the management team decided it was time to look at merging or selling the company. Coopers & Lybrand, the outside accountants, recommended leasing the assets to Clark Retail Enterprises Inc. That deal was completed in April 2001 whereby Minit Mart Foods retained the ownership of the assets while leasing these to Clark Retail. Besides operating their original 600 stores, Clark acquired several other chains in the Midwest area growing to approximately 1,200 stores.

Competition in Clark's area became very intense, and they were unable to adapt fast enough. This inability to react lead to their bankruptcy. During bankruptcy Clark was able to sublet 47 of the stores to T-Mart of Sturtevant, Wis. (T-Mart has now gone bankrupt). The remaining 37 stores were returned to Minit Mart with Higgins starting his second career in the industry. Today, the stores are a combination of convenience and grocery shopping, and 24 stores offer O'Deli's subshops and Godfather's Pizza. All 33 stores offer Marathon gasoline, which now has a Marathon/MasterCard that offers customers a 5% discount on gasoline purchases. This is a strong offering allowing Minit Mart to compete with other discount fuel retailers.

Higgins credited his success directly to the Minit Mart management team and employees surrounding him along with his family.

In other association news, PMAA said that Marylee Booth, executive director of
the Tennessee Oil Marketers Association (TOMA), plans to retire December 31, 2008. She has had a distinguished career leading and managing TOMA for more than 23 years. Emily LeRoy, TOMA's associate director, has been selected by the search committee to become the new executive director. She has been active in PMAA initiatives for more than 12 years.

And Duxbury, Mass.-based VERC Enterprises said that president and CEO Leo Vercollone was the recipient of the Special Legislative Award from the New England Convenience Store Association (NECSA). Vercollone was lauded for his willingness to testify on behalf of NECSA on a number of legislative issues.

The New England Convenience Store Association represents and protects the interests of retailers and suppliers in the c-store and petroleum industry in Connecticut, Maine, Massachusetts, New Hampshire, Rhode Island, and Vermont.

"I am deeply honored to have received this award from an organization that is so vital to our industry," said Vercollone, who has directed the growth of VERC Enterprises from a single location to its present market share of more than 20 locations throughout Massachusetts and New England. 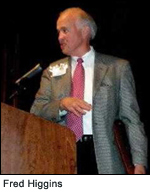