Charles Olenik is feeling the dollar-store disturbance. Owner of Camp Custer Service in Hardin, Mont., Olenik says a nearby Family Dollar is proving to be increasingly competitive in some key areas. 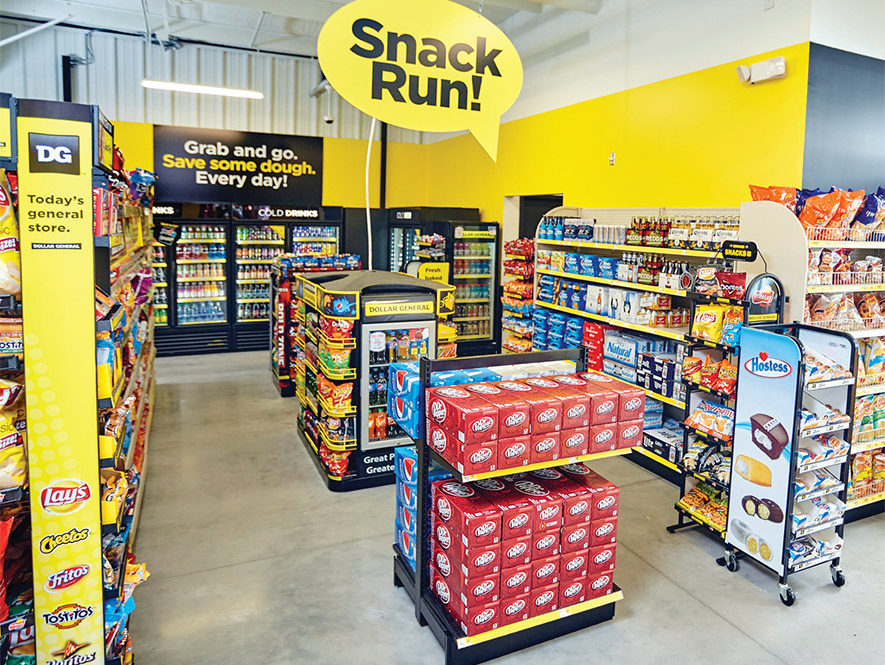 “They lowball the drink and snack categories and are cutting into my 12-pack pop sales along with name-brand and off-brand snacks,” Olenik says. “Since they get national account pricing, they have the advantage there.”

To fight back, Olenik has stocked up on more low-priced items and will need to continue to “balance margin with promos to compete,” he says. Where’s he winning? “Their checkout system and customer service are abysmal. This is where my store can gain advantage.”

Causing concern for John Strickland Jr., president of Goldsboro, N.C.-based Wayne Oil Co. Inc., is the tendency for dollar stores to open in rural areas like his, where low price points lure in shoppers.

“Dollar General competes with us in all categories. Last year they added cold vaults and now stock a limited assortment of alcohol,” says Strickland, who operated 14 Ballpark-branded c-stores throughout North Carolina before selling 13 to Reliance Oil late last year.

The silver lining for Strickland? “Much of their business is walk-up traffic, and the merchandise selection is of a lower quality than what we carry,” he says.

Dollar stores have long been contentious competition for c-stores, and the channel’s recent forays into immediate consumption, tobacco and smaller stores have increased the threat. To better compete, c-store retailers need to better understand their discount retail rivals—and their strengths and weaknesses alike.

Guiler says the product mix between consumables and discretionary products, respectively, is 50-50 in Dollar Tree stores vs. 75-25 in Family Dollar stores.

By comparison, Dollar General’s third-quarter 2017 financial results reveal that sales of consumables account for 78% of net sales at its stores, which are often located in small rural communities. All the big three players have store sizes that range from 7,000 to 12,000 square feet.

Dollar stores have already staked a hefty claim in the snack, candy and soft-drinks categories, all of which c-stores excel at. Now they’re starting to branch out beyond packaged and shelf-stable edibles.

“They’re expanding their roles toward more convenience by beginning to offer more fresh and ready-to-eat foods and, in the future, healthier-for-you offerings,” says Thom Blischok, chair and CEO of The Dialogic Group LLC, Phoenix. “Once they get a cold supply chain that’s right and some differentiation in fresh and perishables, they’ll likely have success and could capture some share.”

Helping to fast-track that goal, Dollar General has installed about 18,000 cooler doors in its existing locations, and Dollar Tree has coolers and freezers in more than 5,100 of its stores, according to Guiler.

While the dollar chains have not yet delved deeply into foodservice and meal replacement, “I would expect to see some prepackaged meals at some point,” says Blischok. The first salvos are found at DGX stores—Dollar General’s new small-format c-store concept, with three locations opened in 2017 (in Nashville; Raleigh, N.C.; and Philadelphia). DGX caters to urban shoppers and offers grab-and-go salads and sandwiches, a coffee station and soda fountain.

Firing another shot across the bow, dollar chains began carrying tobacco products in 2012. “Tobacco sales in the dollar channel are growing very strongly,” says Don Burke, senior vice president for Management Science Associates (MSA), Pittsburgh. Cigarette unit sales were up by 11%, moist sales were up by 37%, cigarillos up by 20% and little filtered cigars up by 46% , Burke says, according to MSA data for second-quarter 2017 vs. the same time frame the previous year.

But in context of the total market, the effect on c-stores has been minimal: The net change in tobacco  sales at a convenience store that has a Dollar General within a 1-mile radius has been only about a 1% loss.

The dollar channel accounts for 7% of all retail stores in the United States, yet only 2% of the tobacco sales; c-stores represent 49% of total U.S. stores and 70% of total tobacco sales, according to data managed by MSA.

The dollar chains are also beefing up their digital footprint, selling c-store staples such as chips, packaged beverages and sweets that can often be shipped to homes (such as Dollar General’s auto-deliver subscription discount on some items and free shipping on orders of $40 or more) or to the store for free pickup (a Dollar Tree perk). Online/mobile shoppers can also download a Family Dollar or Dollar General app, sign up for digital coupons and join a loyalty club (via Dollar Tree).

Yet retail experts don’t expect ample e-commerce sales from the dollar channel. “Dollar stores are putting their marketing messaging and some products and coupons online, but they’re in the early stages of e-commerce,” says Blischok.

Also, it’s hard for chains to emulate online the treasure-hunt experience that shoppers get in a brick-and-mortar dollar store.

“Customers are not interested currently in e-commerce with dollar stores,” Ryan says. “Dollar chains have to be careful not to dilute their strength, which is having a community-focused bricks footprint.”

Still, the potential for future digital disruption is high, if not obvious. “I could see dollar stores creating strategic alliances with online companies like Amazon—putting Amazon lockers in their stores to give people more reasons to shop there,” says Kevin Coupe, founder of Morningnewsbeat.com in Darien, Conn., referencing a move some c-stores have taken themselves.

Go Your Own Way

To steal more market share from c-stores, dollar stores would need to increase their focus on “locational convenience and shifting the mix more to ‘consume now’ products,” Stern of McMillanDoolittle says.

Blischok believes dollar chains also would need to perfect their assortments, declutter their stores and follow a proven formula for success: “Make it easy to shop, provide a lot of expertise and offer fair pricing.”

But Ryan doubts competing with c-stores is in dollar chains’ best interest. “People want to save on commodities available at dollar stores to spend more on life experiences that are memorable, important and shareable on social media,” she says. “So it’s better to stick to a differentiation strategy within the discounting space than compete with c-stores.

“The lines between dollar, warehouse, drug and c-stores are blurring in the eyes of the consumer. The winners in convenience will be the ones who continually and rapidly differentiate, not just innovate, and center around neighborhood and community.”

C-stores will continue to fight the perception that dollar stores are a better value. The strategy, Stern says, is to “work harder to demonstrate value and continue to focus on categories where you have a true advantage, like foodservice, snacks and cigarettes.”

But directly chasing competitors can also lead to dead ends. Instead, “worry about how the majority of consumers increasingly shop and how to drive cross-shopping from the pump,” Ryan says. “If you focus on each vertical competitor, you’re likely to copy that competitor at its strength rather than discover the unmet needs of the consumer—which is more important.” 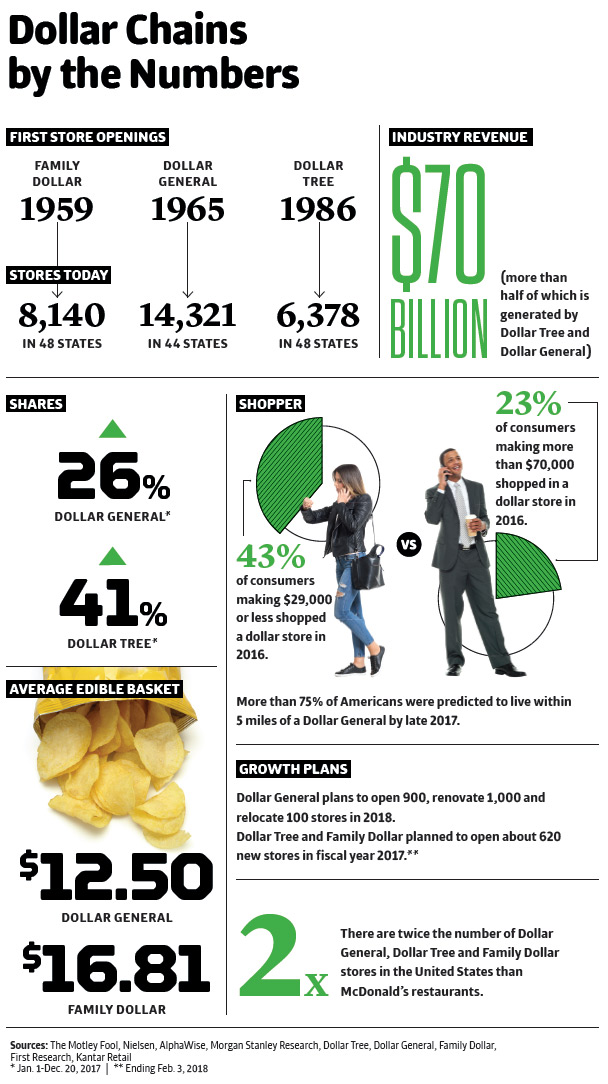