We live in electrifying times.

By 2025, electric vehicles (EVs) will cost less to own than gasoline- and diesel-powered vehicles, according to Bloomberg New Energy Finance. By 2040, EVs will make up 58% of new-vehicle sales in the United States. These are a couple of the more aggressive projections, but regardless of the timeline, it’s hard to find a transportation outlook without electrification.

“When you see EVs and their potential, we have a chance to really change the industry forever,” says Mark McNabb, CEO of Electrify America LLC, Reston, Va. “It’s an exciting opportunity.”

The industry McNabb refers to—the automotive industry—is the one he spent the past 30 years in. It included stints at Maserati, Nissan, Mercedes, General Motors and, most recently, Volkswagen, where he was COO of the VW brand in the United States and head of North American sales and marketing. But his current role has him overseeing something much different—perhaps the largest rollout of EV charging infrastructure in U.S. history—and the convenience-store industry can play a pivotal role in it.

As part of its settlement agreement with U.S. regulators over the diesel-emissions scandal, Volkswagen agreed to invest $2 billion over the next decade in zero-emission-vehicle infrastructure and consumer awareness. In December 2016, Volkswagen created the subsidiary Electrify America to oversee the work, which is moving at a fast clip. The plan:

Electrify America will install the stations in four investment cycles. By the end of the first cycle in second-quarter 2019, it plans to install nearly 450 sites with more than 2,500 charging points. Locations along highway corridors will receive DC fast chargers, which can charge an EV battery to about 80% within 20  minutes, in configurations of four, six, eight or 10 per site.

Approximately 300 more charging sites will go into a mix of retail, workplace, multifamily residential and municipal locations in 11 metropolitan areas. These will be a combination of DC fast chargers and Level 2 chargers, which can charge a battery in about four to six hours. As of press time, Electrify America was still finalizing the rates for EV charging at the stations.

“This is really targeting highway travel and retail mixed use because of the rapid charge times,” says Adam Cook, senior vice president of JLL, a Chicago-based firm conducting feasibility studies and site selection on behalf of Electrify America. JLL is meeting with various real-estate property owners and retailers interested in hosting one of the charging stations, including c-stores and gas stations. And the perks, Cook says, are many.

“The benefit to these properties and asset holders, as they’re looking to be hosts, is creating that dwell,” he says, referring to the time an EV driver would spend on the host’s lot while the vehicle charges. Also, Electrify America is paying for all capital costs related to the design, operation and maintenance of the charging stations.

“We’re giving these lifestyle centers the ability to … create habits with these customers that cause them to return to these places as part of their normal daily, weekly and monthly habit,” Cook says.

To map out the charging network, Electrify America crunched numbers from a combination of EV sales, driving patterns and demographic data to identify areas of demand. Then it examined where there already is charging infrastructure and identified the “energy gaps” in between.

“The first cycle of spend is basically building your skeleton—how you connect the country from coast to coast,” and which cities have the greatest need for more charging stations, McNabb says. On the site level, Electrify America is considering convenience. Highway locations need to be close to the road.

“It really is the No. 1 driving factor,” Cook says. “This national and urban network strategy is pretty finitely designed. For it to work correctly, travelers have to be able to leverage chargers across the highway network, so these have to be placed at regular intervals.” The goal is to keep the charging sites about 70 miles apart, or no more than 120 miles, to avoid any concerns of range anxiety.

Second, is there a retail offer?

“This is extraordinarily important,” McNabb says. “Most people today, because of charging dwell times, are buying something or looking to get a cup of coffee. We like to be near good retail spaces.” Other critical factors: lighting, safety, bathroom access and proximity to power.

As of press time, there were more than 30 locations up and running, with many at high-end shopping centers. But gas stations and convenience stores’ potential role is also big, McNabb says.

“There’s a nationwide network already out there—it’s already built, the infrastructure’s already there,” he says of the country’s gas stations. “It’s very visible, it’s lit well. In a lot of stations, they operate 24 hours a day.”

The c-store itself is also a powerful draw.

“Any type of retail component—especially quick-grab food items, small sundry shopping that come with c-store SKU profiles—that’s really aligned with this type of shopper,” Cook says. He cites one survey that shows an EV driver has an 83% likelihood of making a purchase while waiting for his or her EV to charge, and that four out of five EV drivers plan to make a purchase during their wait.

But not all gas-station footprints will work, such as those without available parking spaces for charging stations, or lots that do not meet zoning requirements for separating the high-powered EV charging stations from the gasoline pumps.

But for sites that do make the cut, it’s a way for retailers to test the potential of EV charging with little financial risk. Electrify America, as the owner and operator of the sites, covers most costs, including construction, McNabb says. It also “insulates” the land holder from electricity and demand charges.

As existing government incentives dry up for charging infrastructure, the Electrify America team is hoping this provides a powerful hook for hosts.

“It’s not a question of if—it’s really a question of when,” Cook says. “Never before has there been an opportunity … to partner with someone who can put up the capital, and really have this clear, public 10-year commitment to funding and supporting infrastructure upgrades.”

Electrify America is on a timeline. Several hundred sites are due to be opened as a part of investment cycle one, which must be delivered by summer 2019. (It has not yet released details on cycles two through four, although each will see $300 million in investment.)

“Speed is our biggest challenge right now,” says McNabb, who describes the site-selection process as “pretty labor-intensive.” For every five to six sites evaluated for a charging station, only one meets all criteria. Also, permitting and construction issues can further slow the expansion.

“That’s what probably keeps me up at night the most: acquiring the sites and building them out moving forward,” McNabb says. At the same time, he feels his 70-person team has made a lot of progress.

But if you build it, will they come? A more important question: Will consumers, who today seem to favor SUVs and trucks, embrace EVs?

Volkswagen’s internal research suggests that by 2020, EVs will make up a half-million in new-vehicle sales in the United States. The German automaker plans to introduce 80 EV models worldwide and sell 1 million of them by 2025. McNabb sees two deciding factors on the timelines: incentives—Congress is considering ending the federal $7,500 incentive for buying a new EV—and automakers’ efforts to meet greenhouse-gas targets set by regulators. That said, this longtime auto-industry exec believes EVs will change everything.

“I don’t think I’ve ever felt the momentum of change so greatly in more than 30 years,” McNabb says. “We’re talking about completely different ways of transporting ourselves in the future. It’s incredibly  exciting. Everybody needs to look at it and get behind it.” 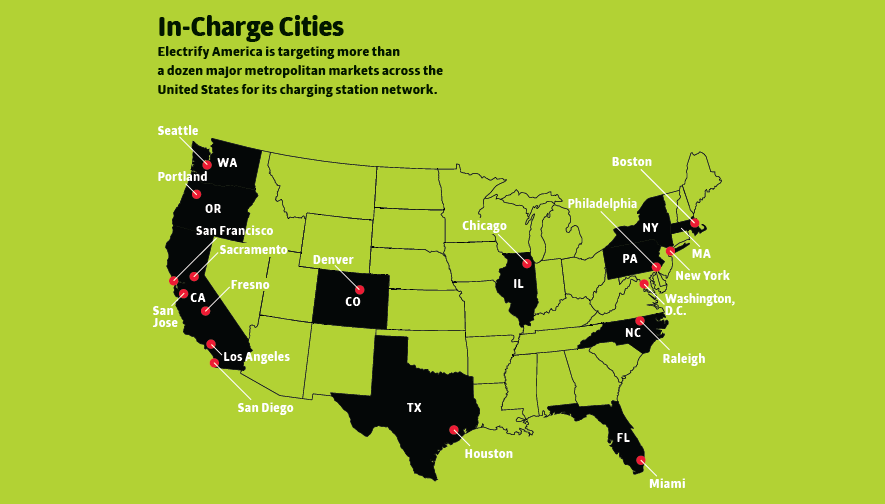