Murphy and Wal-Mart’s relationship has always run hot and cold. It began with both Arkansas heavyweights wanting something. Wal-Mart wanted to draw more traffic onto its supercenter lots. Murphy—then Murphy Oil Corp., focused mainly on drilling for crude and refining it—wanted an outlet for its end product. 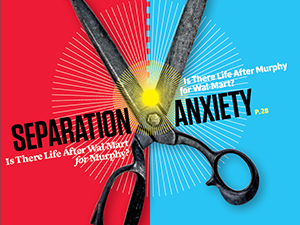 In 1996, the first Murphy USA—the partnership’s exclusive brand—opened in the parking lot of a Wal-Mart supercenter in Chattanooga, Tenn. Twenty years later, the relationship had grown to nearly 1,100 sites, and Murphy had vaulted from a refiner with little retail to the seventh-largest convenience operator in the United States.

“Both knew [the partnership] was going to benefit their companies,” says Jim Fisher, CEO of IMST Corp., Houston. He worked with Murphy on the initial 80 to 100 fueling sites in the mid-1990s, performing site analysis on supercenter locations. (Murphy USA did not respond to interview requests for this story.)

"From a corporate-improvement perspective, it meant for Murphy a great boost to in-house control of its refining capacity in terms of control and distribution,” Fisher says. “And Wal-Mart knew it was going to enhance their in-store performance. It is all about getting a better return on the property.”

Over time, the partnership flexed but held, sprouting more than 100 Murphy USA sites a year by 2006. Then, after formerly leasing land from Wal-Mart, Murphy began acquiring the dirt under its sites. In 2007, Wal-Mart froze new Murphy USA fueling site construction. Over the next few years, Murphy flirted with locations at Lowe’s and launched the Murphy Express store program, building near Wal-Mart supercenters. Then in 2012, things were back on: Wal-Mart and Murphy signed a deal on 200 new sites.

Four years later, the pace of openings is slower, and Murphy and Wal-Mart leadership is new. In 2013, El Dorado-based Murphy Oil spun off Murphy USA and named Andrew Clyde as president and CEO. After years of leadership

by execs with operational chops—Hank Heithaus, former president, left to head Empire Petroleum that year—a former business consultant is now driving the retail business. Over the past two years, much of the rest of the management team has also turned over.

In 2014, Bentonville-based Wal-Mart Stores named a new president and CEO—Greg Foran, who previously oversaw the retailer’s Asia business—for its U.S. division. Foran soon highlighted fuel as an opportunity that had not reached its full potential.

In February 2016, Wal-Mart made it official: It plans to build and operate its own gas sites. (Murphy will continue to operate the current and to-be-built Murphy USA locations.)

“More than anything, Wal-Mart saw the success Murphy was having and is willing to pay a premium to have control over that process,” says Ben Bienvenu, research analyst for Stephens Inc., Little Rock, Ark. The ability to better leverage the relationship between traffic flow, fuel and the store could help it compete, especially against supermarkets with highly effective loyalty programs.

“What competitors have done well—the Krogers of the world—is utilize fuel as a traffic driver,” says Damian Witkowski, a research analyst for Gabelli & Co., Rye, N.Y., citing the success of their fuel-discounting loyalty programs. “I believe [Wal-Mart] now views fuel as important enough to want to control the entire process  themselves.”

Murphy was caught off guard. As recently as April 2015, the operator saw potential for an additional 1,600 sites at Wal-Mart supercenters. It was accelerating openings and updating its store design.

So what now? What is plan B?

Is There Life After Wal-Mart for Murphy?

Is There Life After Murphy for Wal-Mart?