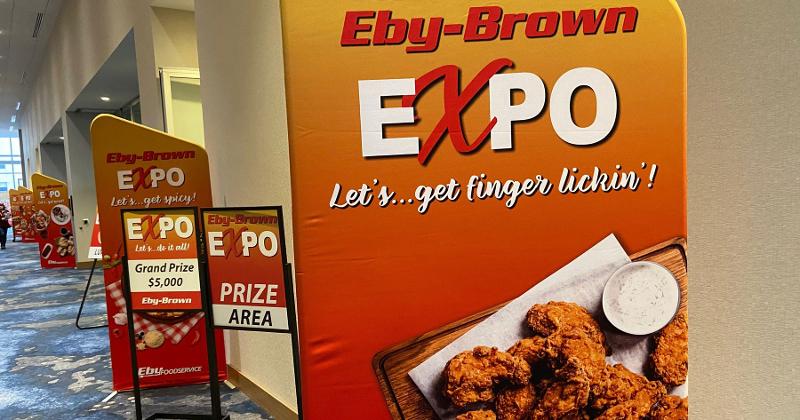 CLEVELAND — Eby-Brown’s Expo East was an opportunity for convenience-store retailers to see new products and make deals with suppliers. It also was a first chance to see the distributor’s three new food concepts designed specifically for convenience stores and in conjunction with new owner Performance Food Group (PFG).

Expo East was Eby-Brown’s first trade show since it was acquired by PFG in July 2019.

“PFG has provided us with a lot of resources,” Tom Wake, president of Eby-Brown, told CSP Daily News. “That allowed us to think outside the box.”

“With PFG, we wanted to find a home for the Eby family,” Wake said, pointing out that his brother, former co-president Dick Wake, retired in February. “We’d like to be No. 1 in convenience distribution. To do that, we have to win the hearts and minds of those [retailers] who love foodservice.”

That’s where the new foodservice concepts come in. Part of Eby-Brown’s Brand Concepts, the programs include complete solutions for foodservice areas: equipment, operator training and, of course, product.

While each of the concepts is built around a brand, said Sharon Kuncl, vice president of food strategy, there are other branding options.

“Although we have brand identities, if a retailer wants to call it Joe’s Barbecue and create a proprietary brand, they can do that,” Kuncl told CSP.

The new foodservice programs were developed by Chef Lonnie Varisco, who has worked for PFG for 12 years and took the lead as the company moved into the c-store channel.

“We’ve got 15 chefs, including Lonnie, bringing ideas to Eby-Brown as they learn c-stores’ needs,” Kuncl said. “These offers need to cover the spectrum so there’s something for every store we serve.”

Varisco said it’s been an interesting challenge. “You have to ask questions,” he said. “What is the labor and talent level that’s available? What is the storage capacity? How much can you charge? It’s all important as we create these programs.”

Joe Roenna, executive vice president of sales and marketing, said that’s one of the key challenges of foodservice in convenience stores. “To do made-to-order foodservice right, you have to be completely committed to it,” he said. “We’ve had some customers who know they can’t make the commitment.”

Those retailers, he said, need to start smaller. “Maybe focus on coffee,” he said. “Ask yourself: What can you actually produce?

"C-stores are so labor-conscious, it makes it terrifying for some,” Roenna continued. “We can give you a range to work within, to figure out what can work in your store.”

Performance Food Group is the No. 3 foodservice distributor behind Sysco and US Foods, according to data from CSP sister company Technomic, Chicago.

Expo East was held March 11-12 in Cleveland. Because of coronavirus concerns, Eby-Brown has canceled its second trade show, Eby Expo Midwest, which was scheduled for March 30-April 1 in Schaumburg, Ill.