OAKVILLE, Ont. & MIAMI -- After teasing the deal on Monday, Tim Hortons Inc. and Burger King Worldwide Inc. on Tuesday announced an agreement under which the two companies will combine to form the world's third-largest quick-service restaurant (QSR) company. 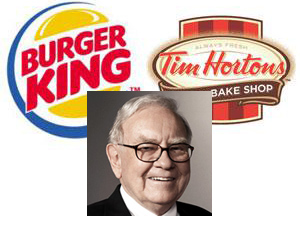 With approximately $23 billion in system sales, more than 18,000 restaurants in 100 countries and two strong, independent brands, the new company will have an extensive international footprint and significant growth potential.

Billionaire Warren Buffett's Omaha, Neb.-based Berkshire Hathaway has committed $3 billion of preferred equity financing. It is "simply a financing source and will not have any participation in the management and operation of the business" the companies said.

The transaction is subject to customary closing conditions, including approval of Tim Hortons shareholders and receipt of certain antitrust and regulatory approvals in Canada and the United States. Since 3G Capital already owns approximately 70% of the shares of Burger King and has committed to vote in favor of the combination, no shareholder vote is required of Burger King shareholders.

The new global company will be based in Canada, the largest market of the combined company. The company is taking some criticism for the deal because it will be structured as a "tax inversion," in which a company moves to a lower-tax jurisdiction.

Tim Hortons and Burger King each have strong franchisee networks and well-known brands. Following the closing of the transaction, each brand will be managed independently, the companies said, while benefitting from global scale and reach and sharing of best practices that will come with common ownership by the new company.

Alex Behring, executive chairman of Burger King and managing partner of 3G Capital, will lead the new global company as executive chairman and director. Marc Caira, president and CEO of Tim Hortons, will be appointed vice chairman and a director, focused on overall group strategy and global business development. Daniel Schwartz, CEO of Burger King, will become group CEO of the new company, with overall day-to-day management and operational accountability. The new company's board will include the current eight Burger King directors and three directors to be appointed by Tim Hortons, including Caira.