CARY, N.C. -- Kangaroo Express' "Roo Cups" are causing more than brain freezes this summer. The refillable cups have rapidly disappeared from stores across the Southeast, and demand is still high, according to a report in the Burlington, N.C., Times-News.

Customers who buy a cup for $6.99 can get free refills on any frozen or fountain drink until Labor Day, Sept. 5.

Ashley Jobe, a senior at Elon University, bought her "Roo Cup" as soon as they went on sale and is strong evidence of the success of the promotion.

"The guy at the counter told me I could [image-nocss] buy a cup for $7 and get any fountain drink or slushie anytime I wanted for as many times as I wanted this summer," Jobe told the newspaper. "I thought to myself: This is fantastic."

The cups are not only meant to encourage customers to get a drink, but also do some good.

"It is part of our campaign, Salute Our Troops," Scott Yates, a spokesperson for Kangaroo Express told the newspaper. "The goal is to raise $1 million for USO, Wounded Warriors and other military support organizations from Memorial Day to Labor Day, and the cups were a part of that."

The proceeds from the cup don't go toward the organization but with more people coming into the store, customers are given more chances to donate, Yates said.

Most of the stores in Alamance County, N.C., said they sold out weeks ago and are hoping for a new shipment sometime this week.

"I posted it on Facebook, I emailed people, I called home," Jobe said. "It's the biggest deal since, I don't even know. But it's a huge deal."

Only 250,000 of the cups were made and there is no way of knowing how many of the last shipment of 36,000 will make it to North Carolina, Yates said.

Some have resorted to selling their cups on Craigslist and other websites.

In Charleston, S.C. a Flag Day "Roo Run" was held in which participants were asked to follow hints on Twitter to find 13 mugs hidden around town. Figures on how much money has been donated to the various groups has not been released, but the numbers are higher than expected, Yates said.

"A lot of people are coming and donating to the military and exceeding our expectations," he said. "We're very excited about the project."

Kangaroo Express convenience stores are owned and operated by The Pantry, a chain of more than 1,600 stores based in Cary, N.C. 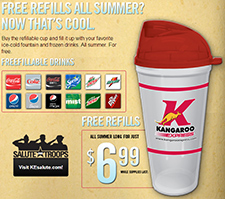