SEATTLE -- Starbucks announced last week its plan to distribute a pay raise to all associates and managers in its U.S. stores. The higher wage levels will go into effect Oct. 3, according to the company, adding it to the growing list of restaurants, convenience stores and others weighing in on the wage issue. 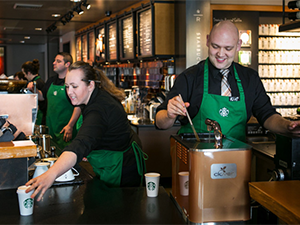 Together with an increased stock-reward program for workers, the wage jump will lift the yearly compensation of Starbucks’ employees—encompassing 157,000 workers in 7,600 units—by 5% to 15%.

In addition, the chain outlined several other worker-related initiatives, ranging from expanded health-care options and improved scheduling practices to relaxing its dress code to allow for more “variety, flexibility and personalization,” according to a statement on Starbucks’ website by CEO Howard Schultz.

The announcement from Starbucks comes on the heels of similar plans recently outlined by a number of leading convenience-store chains, as more of the industry’s top players addressed labor and wage concerns this year. In January, Altoona, Pa.-based Sheetz stated that it would invest $15 million to raise its starting hourly wage to $10—well above Pennsylvania’s $7.25 minimum wage—with shift supervisors getting a boost to $13 and assistant managers making $16.

Similarly, competitors such as Wawa and Rutter’s joined in on this activity. Wawa, Wawa, Pa., increased its pay for customer-service associates to $10 per hour, while shift supervisors were elevated to $13 and assistant store managers saw their pay rise to $17 per hour. York, Pa.-based Rutter’s increased wages for all employees in November 2015, offered its new employees a starting rate of $10 an hour, and enacted performance-based bonuses for both restaurant and store managers.

While Starbucks associates are sure to welcome a pay raise, some of the chain’s customers are sure to notice one likely aftereffect: an increase in menu prices. One day after its announcement of the wage increase, Starbucks revealed what it called “a small price adjustment,” bumping up the price of brewed coffee products by 10 to 20 cents, and 10 to 30 cents for espresso beverages and tea lattes.

The good news for both restaurant and convenience-store chains: Recent research by Technomic reveals that not only do 83% of consumers approve of operators raising the minimum wage, but 72% understand that with increased wages come higher price points trickling down to the menu.