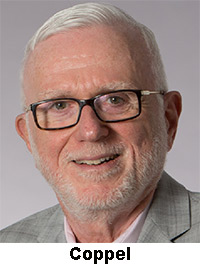 During his time with Eby-Brown, Coppel served as a member of the NACS Supplier Board from 1999 to 2009, as well as the NACS Board of Directors for two consecutive terms from 2004 through 2006. In 2006, he was named Supplier Board chairman for a one-year term.

“Ron joined Eby-Brown in 1990 and worked tirelessly to become one of the prominent faces and voices to the c-store industry, both to the publications and associations that influence our industry,” said Tom Wake, co-president of Eby-Brown. “We tasked him with building our customer base by being an ambassador to our brand and initially ensuring that the Eby-Brown name was known in new territories like Ohio, and subsequently, throughout Eby’s entire market area. We appreciate all that Ron has done for the growth of Eby-Brown and are excited to hear about the next chapter that Ron takes on in his retirement.”

As for the next stage of his life, Coppel is training to be a docent at the Illinois Holocaust Museum and Education Center in Skokie, Ill. The son of two Holocaust survivors, he plans to dedicate himself to teaching its history through his parents’ life stories and emphasizing the importance of standing up for oneself when confronted with prejudice.

Eby-Brown, Naperville, Ill., is a privately held company with annual revenues exceeding $5.6 billion, servicing retail accounts throughout the Midwest, Northeast and Southeast. It is the largest independent c-store distributor in the United States.