SPRINGFIELD, Ill. -- The Illinois and Indiana health departments have deemed synthetic cannabinoids unsafe and issued warnings about the products after several cases of severe bleeding from their use cropped up in each state.

During March, at least 38 people in Chicago and central Illinois have been hospitalized for severe bleeding after using synthetic marijuana, the Illinois health department said. Indiana has also seen an increase in related hospitalizations. Symptoms include coughing up blood, blood in the urine, severe bloody noses and bleeding gums. One individual in Indiana bled after using the marijuana-based products.

And on March 31, the Illinois Department of Public Health reported that a person had died from use of the products. Details about the case, including the person’s name, age and gender, were not released. The person suffered severe bleeding before dying, the department said.

Synthetic cannabinoids—often called fake weed, K2, spice, OMG, Scooby Snacks, AK-47 and other street names—comprise of hundreds of manufactured chemicals, which target the same brain cell receptors as the main ingredient in marijuana. Their effects, often unpredictable, may sometimes be harmful or even life-threatening. 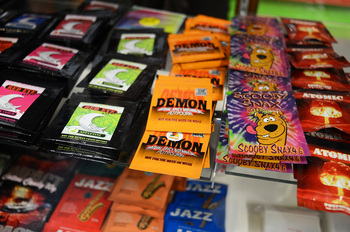 The Illinois Department of Public Health is urging anyone who has a serious reaction to synthetic cannabinoids to immediately call 911 or go to a hospital emergency department.

The synthetic cannabinoids can be found for sale in some convenience stores.

In June 2016, Wisconsin Attorney General Brad Schimel and the Wisconsin Department of Agriculture, Trade and Consumer Protection sued Springfield, Va.-based distributor Capitol Petroleum and its principal, Farooq Shahzad, for allegedly selling the cannabinoids—a violation of Wisconsin’s prohibition on fraudulent drug advertising. In January 2018, the Wisconsin Department of Justice announced that Capitol Petroleum and Shahzad are permanently prohibited from selling or assisting in the sale of synthetic cannabinoids and owe nearly $1.3 million in civil forfeitures, assessments and costs officials, reported Channel 3000 News in Madison, Wis.