SAN ANTONIO -- In a deal that would bridge the geographic gap between its existing retail networks, CST Brands Inc. has entered into an exclusivity agreement to finalize the terms of the definitive agreement for CST to acquire 100% of the outstanding shares of Flash Foods Inc., Waycross, Ga., and certain related entities in Georgia and Florida from the Jones Co. 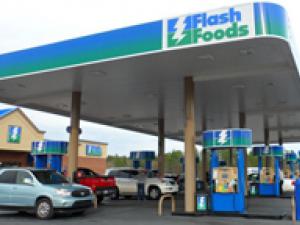 A deal to acquire Flash Foods does not come as a surprise to many industry observers. In recent month, the company has been rumored to be for sale.

As reported in a 21st Century Smoke/CSP Daily News Flash, the company said the acquisition would include 164 Flash Foods convenience stores; 21 branded quick-service restaurants (QSRs), including three standalone locations; a land bank of 15 real-estate sites to build new-to-industry stores; a merchandise distribution company operating a 90,000-square-foot distribution center in Georgia; and a fuel supply company with access to the Colonial and Plantation Pipelines, leased storage and company-owned transportation fleet, distributing fuel to the 164 sites in addition to 10 million gallons to wholesale accounts.

“The anticipated Flash Foods acquisition is a perfect fit for CST’s strategic vision for growth as it allows for growth through acquisitions, organic growth and inside-store growth," Kim Lubel, chairman and CEO of CST Brands, told CSP Daily News. "We will be able to build on the strong, regional brand presence of the 164 Flash Foods stores by building several new-to-industry stores in and around the existing Flash Foods network with the land bank that comes with the transaction. When we add in the fuel supply, distribution center and great people at Flash Foods, we could not be more excited about this anticipated acquisition and how it will allow us to delight more customers every day in the Georgia and Florida markets.”

In announcing the agreement, she also said, “The Jones family, along with their accomplished leadership team, has built a strong company with a customer-focused culture that aligns perfectly with CST’s core values and strategic vision for growth. We are looking forward to entering this new market with such a solid foundation in Flash Foods.”

Jimmy Jones, chairman and CEO of Flash Foods, said, “We are happy to have selected CST Brands from a formidable group of potential buyers. We believe the service culture at CST Brands, and its attitude towards both customers and team members makes CST a great fit for the Flash Foods team. We are excited to work together on finalizing this transaction.”

The purchase would allow CST and its controlled subsidiary, CrossAmerica Partners LP, to connect regional networks across the mid-Atlantic and southern regions of the United States. Flash Foods would roughly link the Nice N Easy Grocery Shoppes in New York and One Stop convenience stores in West Virginia with the Corner Store and Timewise chains in Texas, but leaving the Erickson Oil sites in Wisconsin still disconnected.

Flash Foods began as a small grocery store in Folkston, Ga., in 1952, operated by J. C. Jones Jr. and his father J. C. Jones Sr. The company grew through the 1960s, and it acquired a small wholesale grocery distribution center located in Alma, Ga., to supply the stores. As the grocery-store industry evolved toward ever larger supermarkets, Flash Foods underwent a fundamental change to a convenience-store format, with individually sized grocery products, snacks and drinks. The stores were open for business when the supermarkets were closed.

It added gasoline pumps, usually as part of a joint venture with a local oil company distributor. In 1981, it created Fuel South to purchase fuels directly from refiners and distribute it to Flash Foods stores.

And it created The Jones Co. in 1982 to serve as a holding company for Flash Foods and affiliated companies.

CST Brands is one of the largest independent retailers of motor fuels and convenience merchandise in North America. Based in San Antonio, it has approximately 1,900 locations throughout the southwestern United States, New York and eastern Canada offering a broad array of convenience merchandise, beverages, snacks and fresh food. In the United States, CST Corner Stores sell fuel and signature products such as Fresh Choices baked and packaged goods, U Force energy and sport drinks, Cibolo Mountain coffee, FC Soda and Flavors2Go fountain drinks. In Canada, CST is the exclusive provider of Ultramar fuel and its Dépanneur du Coin and Corner Stores sell signature Transit Café coffee and pastries.

CST also owns the general partner of CrossAmerica Partners, a wholesale distributor of fuels, which distributes fuel to more than 1,100 locations across 23 states.