FINDLAY, Ohio -- Marathon Petroleum Corp. president and CEO Gary R. Heminger praised Hess Corp.'s for-sale retail network as "one of the best looking systems on the East Coast" during MPC's conference call with analysts announcing its third-quarter 2013 earnings and touting the growth experienced by its own Speedway retail network. 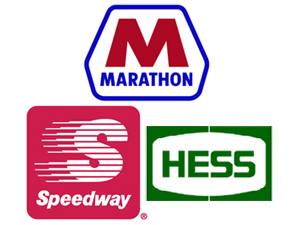 New York City-based Hess announced earlier this year that it is exiting retail to become a pure-play exploration and production entity.

Heminger has hinted before about interest in acquiring the assets, and like those times, in this instance he continued to keep his intentions close to his vest.

Heminger said that the results were supported by--among other factors--strong performance by Speedway.

"Speedway's excellent results reflect an increase in same-store sales, along with higher gasoline and distillate gross margins," he said in the earnings release. "We are investing in Speedway's continued success through an expansion of growth opportunities. By adding new convenience stores in Pennsylvania and Tennessee, we have increased the number of states in which Speedway has operations from seven to nine."

During the call, he added, "Speedway delivered strong performance for the quarter, resulting in more than a 34% increase in income from operations compared to the same quarter last year. This was driven in part as a result of an increase in same-store sales volumes and margins and cost control. Speedway continues its expansion in contiguous markets with construction of new stores in Pennsylvania and Tennessee, as well as its growth in commercial fueling locations for increasing sales of diesel fuel."

He continued, "With our Canton refinery with Utica Shale and moving this product into Western Pennsylvania, especially as you see some of the logistics change from the East Coast that used to bring refined product back to Western Pennsylvania, we have seen a great opportunity to move into that market. And Speedway has done so, same as in Tennessee. So they're expanding those markets as well as continuing to fill in the flanks, if you will, in the current markets in which we have operated--more so with rebuilds stations than with new builds in those states.

"But we're going to continue to step out with Speedway. I doubt that we will do a leapfrog of several states unless we can do something that has some market density."

Concerning the Hess retail network, Heminger said, "I think it would be an excellent fit. We'd be an excellent fit [for Hess] with Speedway. Marathon is the upper side of our business, whereas Speedway is the company-owned and operated side. So we'd be a good fit there."

Does Marathon Petroleum Have Hankering for the Hess Retail Network?