HICKSVILLE, N.Y. -- Irish retailer Applegreen/Petrogas could invest a healthy portion of $17 million to build a presence in the United States after opening two sites on the East Coast this spring. 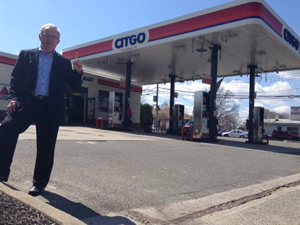 According to the Irish Times, Applegreen bought two convenience stores with gasoline pumps on Long Island, N.Y., and Bob Etchingham, co-founder of the group, is scouting additional sites on the East Coast.

On April 11, Applegreen posted a photo (at right) of Etchingham in front of one of the unassuming sites along with the caption: “Our U.S. adventure begins!! 1st two sites in U.S. Long Island - Plainview and Hicksville!”

Joe Barrett, who founded the business with Etchingham, told the newspaper Applegreen will probably open another “two to three” U.S. sites this year, as well as another five in the U.K. Applegreen currently operates 45 stores in the U.K.

Barrett says the company could invest as much as €100 million (almost $17 million U.S.) expanding its network at home and abroad over the next three years: “We’ll ramp it up over time. It’s not our style to enter markets with a big bang,” he told the newspaper.